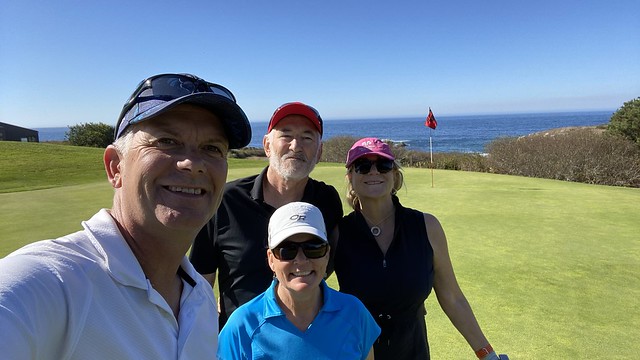 After a quick breakfast, Kevin, Donna, Sharon and I took off for the Sea Ranch Golf Links. I was pretty happy with how I played; I had a very liberally scored 101.  I was striking the ball well and don't feel like I ever chunked the ball.  I struggled on the par five sixth and thirteenth holes.

Sharon played very well. Sharon had four pars on the front nine, including three pars in a row. She wants to play again at the end of the week.

After golf, I headed back to the house, while everyone else went into Gualala to shop for dinner. I spent the late afternoon in two meetings for work.

For dinner, Kevin barbecued a couple of steaks. We had a nice dinner of steaks, baked potatoes and salad.

After dinner, we played three games of Unstable Unicorns. I won one game.

We finished a late night struggling with the hot tubs. I think Sharon may have pushed a clean button. Sharon and Kevin spent some time in the hot tub before we crashed...
By Heringer at 10/18/2020 11:59:00 PM