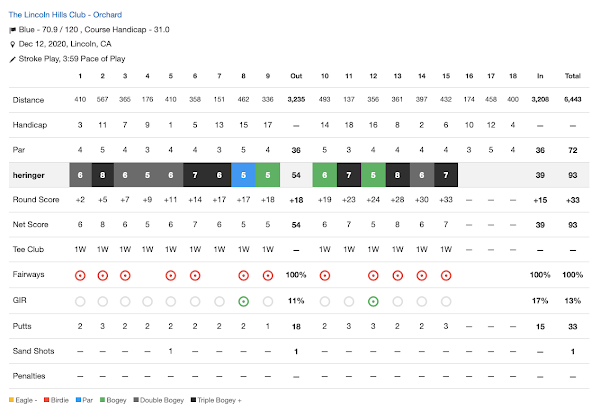 Sharon and I played golf on Saturday afternoon with Holly and Van at Lincoln Hills on the Orchard Course. Originally, we were planning to plan on Sunday, but decide to switch to Saturday based on the forecast of rain on Sunday. I have never played this course before.  Teeing off at 1:15 pm, we are able to play fifteen holes before it got dark.

Like when played on the day before Thanksgiving, I feel solid at the driving range, but couldn't translate that to the course. I continue to play inconsistently. Surprisingly, my chipping wasn't the biggest problem... I had a par on a short par five. Additionally, I had three iron shots (a long pitching wedge, a nine iron and a seven iron) that were as good as I can hit a golf club; each dropped on the green with a deep divot. I struggled on a several of the more difficult holes (lots of tules!).

After golf, we had a socially distance dinner with outdoor heaters in Holly and Van's backyard. We got a Doordash delivery from Sienna. Van and I had stir fry (tofu and chicken, respectively), Sharon had a burger and Holly had short ribs.
By Heringer at 12/12/2020 11:59:00 PM