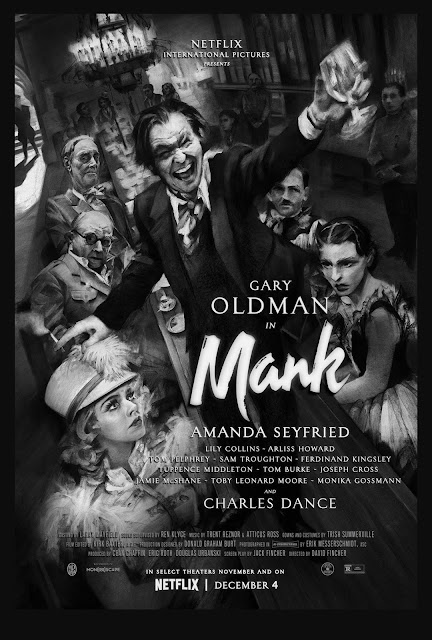 Saturday night, Sharon and I watched Mank on Netflix. This film is being talked about for several possible Oscar nominations, including Best Picture, Best Actor, Best Supporting Actress and Best Original Screenplay.

Mank is a biographical drama film about screenwriter Herman J. Mankiewicz and his development of the script for Citizen Kane (1941). Directed by David Fincher, it is based on a screenplay by his late father Jack Fincher.

Sharon did not like the movie. She said "that was terrible" when it was over. She rated it 2 on a scale of 10. Sharon had a hard time following the plot.

I enjoyed it much more than she did. I have a very different perspective. I liked the movie more than Moonlight (2017 Best Picture Winner) or The Shape of Water (2018 Best Picture Winner). It is very much an "Inside Baseball" kind of picture about the movie industry in the 1930s. Gary Oldman won the 2018 Best Actor Oscar for his performance in The Darkest Hour. I think that he will get nominated for this film.
By Heringer at 12/07/2020 05:00:00 AM