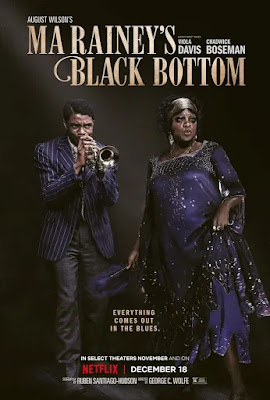 The play's title comes from Ma Rainey's song of the same name. Rainey was a well-known blues-singer in the 1920s.

The movie chronicles the 20th-century African-American experience. Set in Chicago in the 1920s, Ma Rainey's Black Bottom deals with issues of race, art, religion and the historic exploitation of black recording artists by white producers.

When it was over, Sharon said "that was not good." While I liked it more than Sharon did, I don't recommend it. Boseman has several particularly powerful scenes. It will be interesting to see if he wins an Oscar.
By Heringer at 12/18/2020 11:59:00 PM