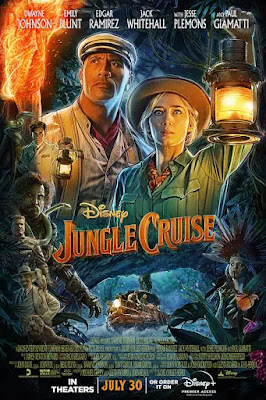 Saturday night, Sharon and I watched the Jungle Cruise on Disney+ on the AppleTV. It is going to be interesting to see when we are willing to go back into a theater to see a movie.

Jungle Cruise is a fantasy adventure film directed by Jaume Collet-Serra from screenplay written by Glenn Ficarra, John Requa, and Michael Green. It is based on Walt Disney's theme park attraction of the same name.

Produced by Walt Disney Pictures, the film stars Dwayne Johnson, Emily Blunt, Édgar Ramírez, Jack Whitehall, Jesse Plemons, and Paul Giamatti. It follows the captain of a small riverboat who takes a scientist and her brother through the Amazon jungle in search of the Tree of Life.

After seeing the movie last week, Sharon's brother texted us "High marks for new Disney movie “Jungle Cruise” ⛴ The Rock rocks, most entertaining movie I’ve seen in quite a while draws from or pays homage to The Mummy, Indiana Jones 🐍🐍🐍, The African Queen  and all those deadpan humorists who captained the Disneyland cruisers through the decades."