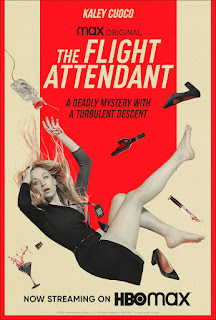 In March, Sharon and I finished season one of the Flight Attendant. It took us four or five months to work our way through the eight episdoes.

The show is comedy-drama streaming television series based on the 2018 novel of the same name by Chris Bohjalian. It stars Kaley Cuoco [Big Bang Theory] in the title role. It premiered on HBO Max on November 26, 2020.

American flight attendant Cassie Bowden is a reckless alcoholic who drinks during flights and spends her time off with strangers, including her passengers. She gets engulfed in a complex plot involving murder for hire and international arms deals.

In December 2020, the series was renewed for a second season. The second season is scheduled to premiere in the spring of 2022.

Part of the reason that it took us a while to finish was that I was luke-warm about the series. There was a plot vehicle used to move the story along that I just didn't enjoy.
By Heringer at 8/12/2021 11:59:00 PM