The plan for the day was to hike the SF Crosstown Trail starting where we stopped in late June. Up about 630 am, we had breakfast delivered to the room at 730 am. Instead of serving a breakfast buffet, the lodge offered a tray each morning either for pick up in the lobby or delivered to your room. 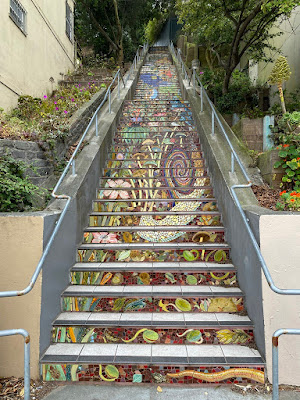 We caught an Uber to the Rose Garden in Golden Gate Park and started the hike from there. We were moving by 845 am.
The trail wandered across Gate Golden Park looping around Stow Lake. From there, the trail crossed the Inner Sunset district and climbed a series of stairs into Golden Gate Heights. Unfortunately, it was very foggy and misty.

Dropping out of Golden Gate Heights, we walked through the Forest Hill neighborhood. From there, we looped through the Laguna Honda Community Trails and down Glen Canyon. We stopped briefly at California Historical Marker for The First Dynamite Factory in America.

We stopped for lunch in Glen Park about 12:15 pm. I had scouted places along the trail to have lunch. Glen Park was one of the few areas that had a number of choices.

Although we had talked about splitting the hike into two days, we keep moving after lunch and covered a lot of ground. I took us on a short detour to find the California Historical Marker for St. Mary's College. The fog burned off and we had some great views back into the city and into the bay from McLaren Park. From there, we dropped down through the Visitacion Valley Greenway.

After the Greenway, the neighborhood got a little rougher. Walking through the Little Hollywood neighborhood, we crossed under Highway 101. After passing through an area of businesses and condos, we got a rude awakening. The Hunters Point Expressway is essentially a giant homeless encampment with lots of beat up RVs and cars parked. The area is very sketchy. We called for an Uber and headed back to the lodge.

For anyone doing the trail, I don't recommend the section after the Visitacion Valley Greenway. I would either start there going north or stop there going south.

In total, we covered almost twelve (12) miles in five hours and forty-one minutes. A map is here.

We were back at the lodge just before 4 pm. Like Friday evening, we had wine and cheese on the portico of the lodge. Sharon talked about wanting to redo the Golden Gate Heights stairs section someday when the weather was better.

We finished the day with dinner at Sessions at the Presidio. Given how much we hiked, we drove the short distance to dinner. For starters, we split oysters of the day [half dozen oysters, kohlrabi, pink peppercorn mignonette, lemon] and deviled eggs [white sturgeon caviar, pickled shallots, shichimi togarashi, chives]. For entrees, Sharon had pan roasted salmon [heirloom tomato salad, summer beans, frisee, tarragon, champagne vinaigrette] paired with a 2019 lungolago from the viandante del cielo estate winery, while I had bolognese [pappardelle pasta, skywalker ranch wagyu beef, parmigiano reggiano, fine herbs, olive oil] paired with a 2017 cuvee rouge ‘1784’ from château margüi.
By Heringer at 8/21/2021 11:59:00 PM