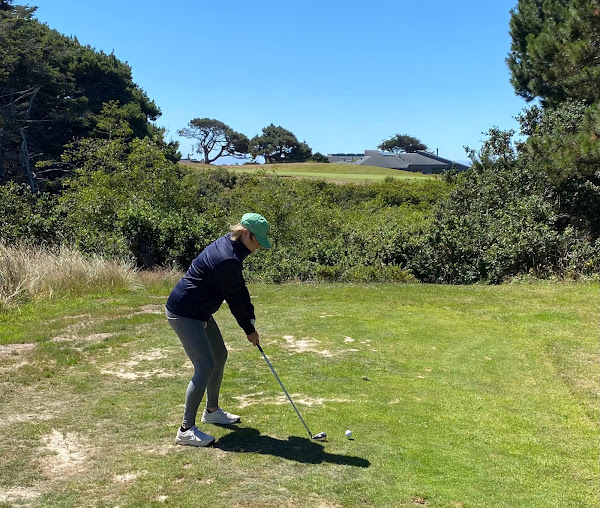 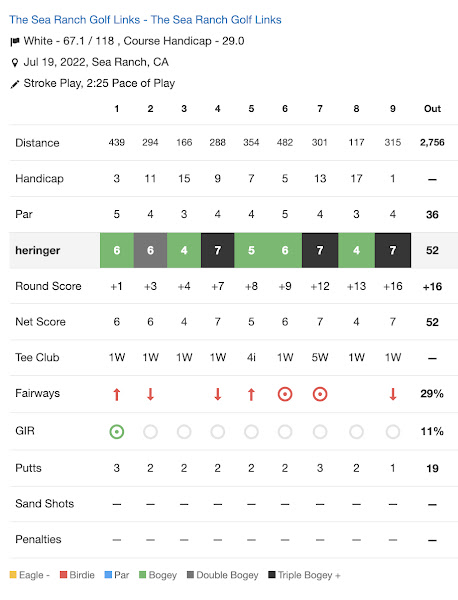 Sharon and I decided to slip in nine holes of golf on Tuesday morning. We had a 9:30 am tee time.

I felt pretty solid on the range and got off to a great start. I hit three good shots and was on the green in regulation on the par five first hole. Over the course of the morning, I was better than Saturday, but still wildly inconsistent. On the par three eighth over the ravine, I hit my first shot into the ravine, but then dropped a six iron about ten feet behind the flag with a mulligan. Sharon hit safely on the eighth to the right edge. I ended up with a very liberally scored 52.

It was a beautiful morning. The only problem was that we were behind a couple of foursomes of the women's league. They were playing very slowly. On the greens, some of them wanted the flag in and some wanted the flag out. They would put the flag in for someone to putt and then take it out for the next person to putt and then put it back in. I have never sat and waited as much in my life.

After golf, we went to Trinks for lunch. Sharon had a B B L T (Smoked Bacon, Blue Cheese, Lettuce, Tomato, Mayo, On a Sourdough Baguette), while I had a MOMS TURKEY (Turkey, Cranberry, Lettuce, Honey Mustard, Mayo, On Ciabatta).

On the way back to the house, we made a stop to look for several Sea Ranch architectural markers. Sharon also wanted to stop at the gift shop at the lodge.

Drew, Jack and I played played Catan in the afternoon. Over the course of two hours, we played three games. Drew won them all! While we were playing, Sharon finished her puzzle.

We got a build your pizza from Upper Crust Pizzeria in Gualala. We finished the night watching Love Story. In real life, Ali MacGraw was married to Bob Evans, head of Paramount Studios, in the early 1970s. As fictional characters, they both appeared in The Offer and there was a lot of discussion about the film.
By Heringer at 7/19/2022 11:59:00 PM