With Sharon sleeping late, I went down to the work out room in the hotel. I ran four miles in 57 minutes on the treadmill. I watched the end of the women's Wimbledon finale. Elena Rybakina defeated Ons Jabeur. I was fascinated by the fact that Rybakina was a head taller than Jabeur [6' versus 5' 6"].

After getting cleaned up, Sharon and I walked west on Californa to Jack's apartment. We made a quick stop for scones and crossiants at Souvenir Coffee on Larkin Street.

We got a chance to see Jack and Jason's apartment. It is on Hyde Street above the Cable Car line.

The plan for the day was to hike the middle section of the SF Crosstown Trail. We hiked the whole trail last summer, but Sharon talked about coming back and hiking the Golden Gate Heights section again when it was clear.

We caught an Uber from Jack's apartment to the Rose Garden in Golden Gate Park. From there, we headed south on the trail. This section includes the Hidden Garden and 16th Avenue/Moraga Tiled Stairways. With a clear day, we had some interesting views. 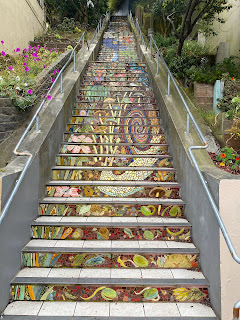 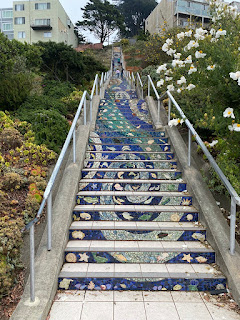 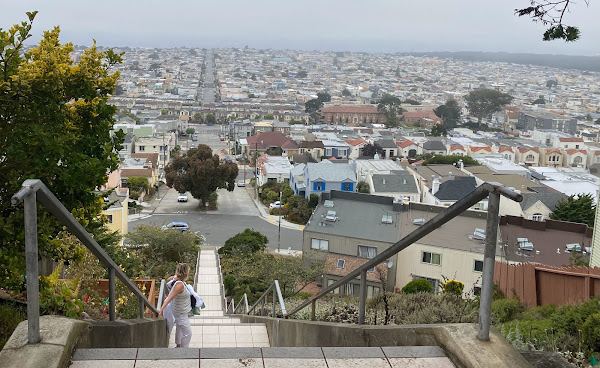 In total, we hiked a little over four miles in just under two hours. We had a late lunch at Foodee Burger in the Forest Hill neighborhood. Sharon and Jack had burgers, while I had a spicy tuna sandwich. They had an interesting selection of beers from Vietnam and Cambodia.

We took an Uber back to the Ritz Carlton. Sharon and I took a nap and then got cleaned up for dinner.

We met Jack in the Ritz Carlton bar and then walked down California to dinner. Just as we were walking up to the restaurant, Drew pulled up to the valet. The four of us had dinner at Perbacco.