Jack played in his fifth flag football game of the 2007 season. He had two nice catches in the first half. Jack had a 25 yard gain on his first catch. His second reception was good for 55 yards and his team's only touchdown. He played quarterback on one play and threw an incompletion. Jack also threw an incompletion on a halfback option.

I was particularly proud of a couple of his defense plays. Playing safety, Jack rushed the passer and partially tipped the ball. The pass was tipped into the hands of the receiver. Although he was probably more than 15 yards behind the play, Jack chased the play all the way down the sidelines, actually catching up with the receiver just before the goal line and making a diving attempt for the flag. He never gave up. In the second half, Jack made an athletic play to get in front of the receiver and knock down the ball. 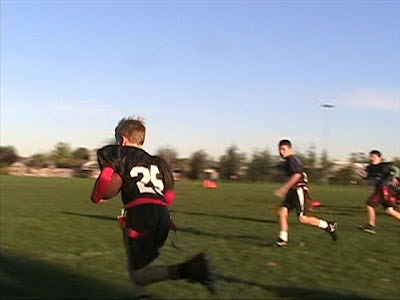