Jack played in his eighth and final game of the 2007 flag football season. Jack caught two passes for nice gains in the first half. He played very well on defense and made a number of great stops.

He played quarterback almost the entire second half. Jack was 1 for 5 with one touchdown pass. Although Jack has a tendency to fire passes into traffic, most of the incompletions were drops of catchable balls. As the last game of the season, the coach was making an effort to get the ball to everyone on the team. 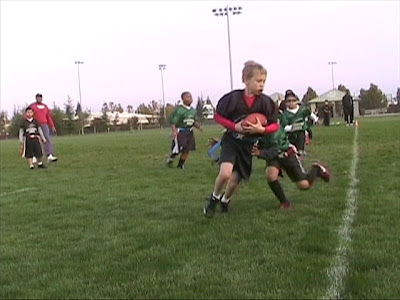