Drew stayed with me at the Hilton on Friday night. While I went for a long run in Central Park, he slept in. After getting cleaned up, he and I took a cab to the West Village to meet Morgan for breakfast. She and her band (Big Tree) are taking off early Sunday morning to drive to the West Coast. They have a couple of dates to play along the way. Big Tree will be playing a number of dates on the West Coast during the first two weeks of June.

From there, Drew and I caught the subway north. We stopped and spent a couple of hours wandering the Metropolitan Museum of Art. We focused on seeing a few specific things, including the Temple of Dendur and the late 19th and early 20th century European painters. I dragged Drew around looking for the Caravaggio's and the Jackson Pollack's.

Back to the subway, we continued north to the new Yankee Stadium. We saw the Yankees play the Phillies. Our seats were in the second row of left field. 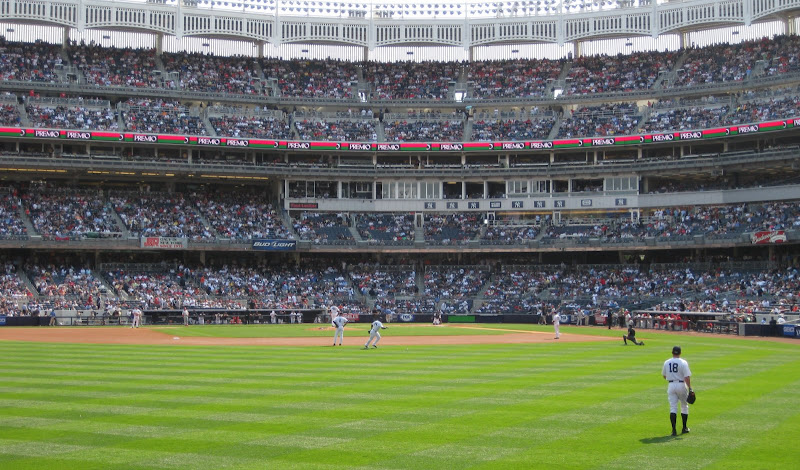 It was a very entertaining game. We had two home runs hit into our section, one of them just over us and out of our reach. With the Phillies leading 4 to 2 in the bottom of the ninth, Rodriguez hit a game tying homer off Brad Lidge. Melky Cabrera then capped the three-run rally with an RBI walk off single, giving the New York Yankees a 5-4 victory over the Philadelphia Phillies.

Back into the city, Drew and I caught up with my sister Lee Ann and her husband Dean. The four of us had dinner at a Spanish Bistro called Islero.

After dinner, Drew and I tracked down his friend Max. The three of watched the end of the Lakers and Nuggets play-off game at the House of Brews just off Broadway.

We split up after midnight. Drew went back to the West Village to meet up with his mom; they are taking off early tomorrow. I headed back to my room to crash.