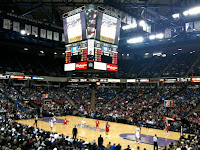 Liz, Jack, Sharon and I went to the Sacramento Kings versus Philadelphia 76ers NBA Basketball game. In a game that the Kings probably should have been able to win, they lost by the score of 116 to 106. 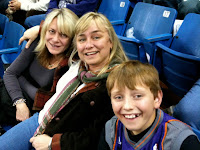 The high scorer for the 76ers was point guard Lou Williams with 22 points. Allen Iverson played for the 76ers; he had 20 points in 32 minutes.

In a tight game, the difference down the stretch was the 76ers 3 point shooting. The 76ers went 9 for 16 from 3 point range. Iverson was 2 for 2 from three, while 76ers reserve guard Rodney Carney was 4 for 5.

We were sitting section 111 row T. During the second half, Beno, Casspi and Nocioni got into an argument right in front of us about who should be where on the court when they were running the offense. All of three of them were pointing and gesturing at different spots on the floor. With more than 30 games behind them, this is a clear sign that the Kings have had to make too many changes in the line-up.
Posted by Heringer at 12/30/2009 11:59:00 PM