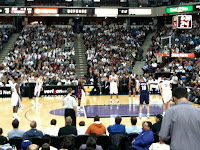 Jack and I went to the Sacramento Kings versus Cleveland Cavaliers NBA basketball game. For 48 entertaining minutes, the young Kings stayed right with LeBron James and the rest of the Cavs. The Kings even had a chance to win the game at the end of regulation. Ilgauskas hit three 3-pointers in overtime and the Cavs outscored the Kings 13 to 0 in overtime to win by the score of 117 to 104.

Down the stretch, the Cavs switched LeBron on to Evans. Evans tried to go at LeBron several times, including the last play of the game, and came away with only one basket. Tyreke made one amazing move to get by James but then ended up air balling the shot. Evans went 1 for 8 in the fourth quarter and the overtime.

A couple of random comments...

All five of the Kings starters are 23 years old or younger! Evans is 20, Cassipi is 21, Hawes is 21, Green is 21 and Thompson is 23. All of the starters were selected in the first round of the NBA draft in the last three years.

Shaq towers over everyone on the court; he looks huge. Hawes covered him much of the night and is listed at 7' 1" and 245 pounds. Spencer looked tiny next to Shaq. Unfortunately, Shaq does not look very mobile or agile.

In 30 games this season, Ilgauskas had taken and made one other 3 point shot. He was 3 for 3 from 3 point range in the overtime. WTFO!?!

There was a nice crowd at Arco. The arena holds 17,500 and I would have guessed that the crowd was more than 15,500 fans. The box score shows the attendance was 16,407. Both of the other games that I have gone to this season had crowds of about 10,000. You could really tell the difference in the concourse before the game and during halftime.

We saw Lew Gasper at the game. He was sitting about 10 rows behind us in the same section [with his dad?].