When Southwest ran a cheap fares promotion in October, I decided to grab a ticket to come up and see the Wallens. Up early, I caught an empty 7 a.m. flight from Sacramento to Seattle-Tacoma. I rented a car and after a brief period of wrestling with the GPS (it wanted to take me into to downtown Seattle to catch the ferry to Bremerton) I drove to Wallen's beautiful place on Phinney Bay.

John, Jill and I had a long leisurely lunch at the Boatshed in Bremerton. There was a grey whale swimming back and forth between the Manette Bridge and the Turner Joy. It was an amazing sight. 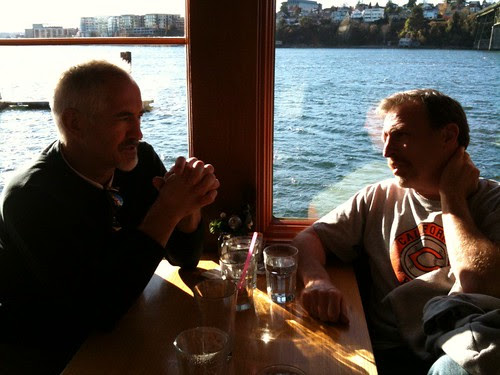 In the early evening, the three of us headed to a Christmas party thrown by the CEO of Harrison Medical Center. John is currently serving as the Chairman of the Board. I met the CEO and his wife before at Jill's 50th birthday party. I had a nice evening tagging along with John and Jill as they mingled in a crowd of more than 100 people.
By Heringer at 12/05/2009 11:59:00 PM