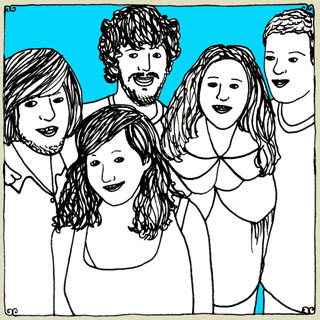 Kaila and Morgan's Band, Big Tree, was featured on Daytrotter.com. There is a write-up on the band and some songs available to play on-line and download.

You can just go right ahead and throw out the very real fact that this Brooklyn band have the name Big Tree. It's so close to the bone that it must be talked about anytime they are. Band names are just band names most of the time. The Arctic Monkeys aren't from anywhere near the Arctic and they aren't monkeys - just one example of millions. It's almost always gibberish gunk, serving the purpose of recognition and nothing else. Well, not so in the case of this mood-inducing, mood-furthering band led by vocalist Kaila McIntyre-Bader. Each of the five members of this ensemble harbor tree houses and nests in their heads, places that they shy away to when they need to feel things in their lives getting easier, even just for a second, for a half hour. They have these places of solitude that they can just scamper away to for a much-needed retreat, getting to where the out of control expansion of the frightening hecticness cannot get at them directly. The songs on the band's self-titled debut are scattered with hints and references to big, thick trees, their boughs and the kind of safety and escape that they can offer to those seeking a disappearance, for whatever reason that may be. Really, who needs a reason to disappear? It's okay to just leave today and Big Tree gives us that out, that ability to just swiftly leave here, to tear up the trunk of a huge maple or spruce and just get lost in the green leaves and the heights. It's not even just the urge to scale up a hunk of bark and leave the ground and all of the pestering and irritating people and problems below, it's getting lost in the piping and duct work of the trees that McIntyre-Bader and band are suggesting. She sings on "Woods," a breezy and slightly rowdy (for them) newer, non-album track about how all she wants to do is climb through the roots of a tree to the ocean, where they must lead, she figures. The songs are slow cookers, letting all of the instruments move at an easy-going pace, stretching and silently groaning in delight - the cymbals shimmering a clanging shower and the pitter-patter of tom feel outdoorsy, as if we're all being made aware that we might need to find real shelter if the skies turn evil and unreasonable. There are nests being made in heads of hair and McIntyre-Bader is left thinking such vulnerable thoughts as, "I'd like to see a time-lapse of daylight/I'd like to see a time-lapse of the spring to summer/I'd like to see a time-lapse of the change of hearts," and leaving us to recognize that somehow in the time from when the song started to when it finished, we'd moved into the tree too, keeping close to as many parts of it to hold onto, but really relishing that we're now in the same space - out of the way and feeling relatively safe.