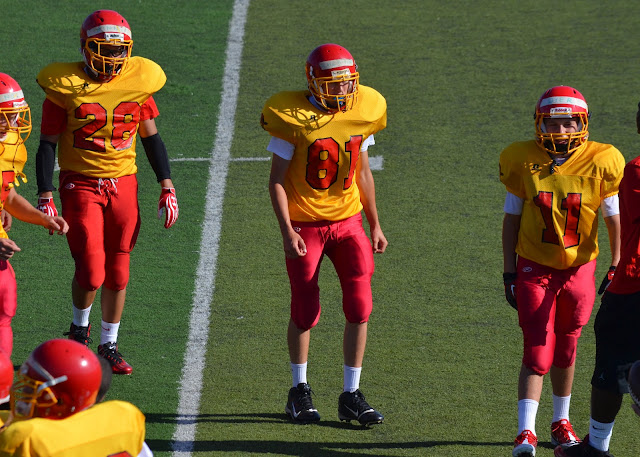 2012 Rio Linda Frosh Football Jamboree, a set on Flickr.
The Freshman Jesuit Marauders Football team played in the Rio Linda Football Jamboree. This was essentially a scrimmage against three other teams. Starting at 9 am, the Marauders played 15 minutes of defense against Placer on the east end of the field. Jack played free safety for the entire segment. He broke up one long pass. Jack came down with the ball, but it was knocked away by the offensive player. Jesuit then played offense for 15 minutes against the Placer defense. The Marauders ended up scoring two touchdowns, while Placer scored one.

In the third set, Jesuit played defense and then offense against Pioneer. Given the number of players of the roster, Jesuit finished by playing two set minute sets against Placer. Jack played wide receiver for three or four snaps in the last offensive set.

On the way home, Jack expressed some surprise over the day. He didn't expect to be playing starting free safety for the Marauders Gold team; Jack only found out when they got there in the morning. In contrast, Jack said that he had been practicing with the first team offense all week, but didn't really play offense today. With 60 plus boys on the roster, the coaches have some challenges. It will be interesting to see how they use Jack in practice this week and in the first couple of games.

Overall, the Marauders looked better on offense than defense. I had frankly thought it would be the other way around. It seemed like their linebackers were getting pushed around.