Back at Golden Eagle for the second day of the Muckdogs 2014 Pre-4th of July Invitational Tournament, the Elite played the Muckdogs. After straining his groin yesterday, Jack said that he wanted to try and warm up and give it a go. As he warmed up, he was very uncommunicative with me and the coaches, but kept giving a thumbs up when approached. Trying to talk to him before the game, Jack said that the groin was fine moving straight ahead, but he had a problem moving laterally.

Leading off to start the game, Jack was 0 for 1 with a walk, a steal and a run scored. In his first at-bat, Jack walked on four pitches. He stole second, went to third on Coop's double and scored on Roessler's single. Jack came up a second time in the top of the first. He hit a 2 and 1 pitch into right field for a looping line drive right at the right fielder for an out in his second plate appearance.

Playing centerfield, Jack didn't have a put-out or an assist. Unfortunately, the outfield scenario unfolded in probably the worst way for him. In the bottom of the first, two fly balls were crushed to the fence in right center. Jack had to sprint to try and catch up with them. If he had been 100%, I think that he might have had a chance at the first one, but the second one was in the gap. You could tell that Jack was laboring. The coaches subbed him out at the top of the second inning.

The Elite traveled to Galena High School for the second game of the day. They played the Team Avenue Aces. This was a team from Fresno that filled in with a few local Nevada players.

Jack didn't dress for the game. I was encouraged when he said "I want to play" as he was walking away from the car in the parking lot.

Taking advantage of five key errors by Team Avenue, the Elite won the game by the score of 9 to 4. The scorecard is here.

The Elite finished the day with three wins and no losses in pool play. There are two more pool games on Saturday. In order to advance to Sunday, the Elite probably have to win at least one of the two games. Only the top two teams in the six team pool advance to Sunday.

For the summer season, the Elite have a record of 10 wins, 8 losses and 1 tie. The game log is here.

We spent a second night at the Grand Sierra Hotel and Resort. After some drinks in the room, Sharon, Jack and I had dinner in the hotel at RIM with the Renterias and Child's dad. 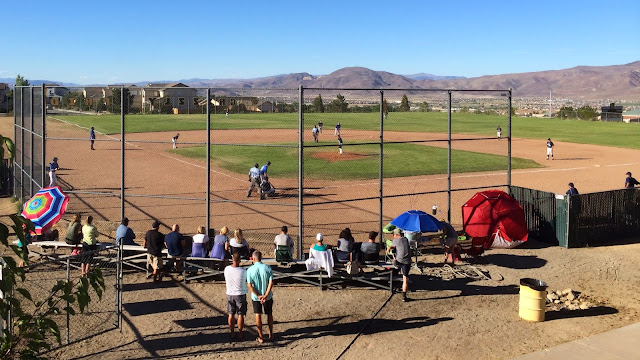