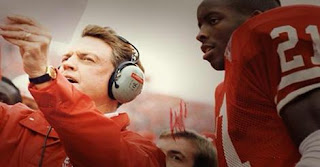 I watched ESPN Films Two Points, One Title. The film explores Tom Osborne's controversial decision to go for a 2-point conversion in the 1984 Orange Bowl.

To set the stage, the documentary looks briefly at the seasons Miami and Nebraska had in 1983. Miami lost its first game of the season and then went undefeated the rest of the way. Nebraska steamrolled teams all year and was a heavy favorite to win the Orange Bowl. It also briefly examines who Tom Osborne is: his upbringing and background.

The film then recounts the game. The Hurricanes won 31-30 when Turner Gill's two-point conversion pass to Jeff Smith was tipped away.

A number of people believe that this win launched the "U" into what it was to become. The rise of the "U" is chronicled in one of the 30 for 30 Volume One documentaries. Without this win, Miami may not have been to recruit some of the stars that fueled the teams success in the 80s and 90s.