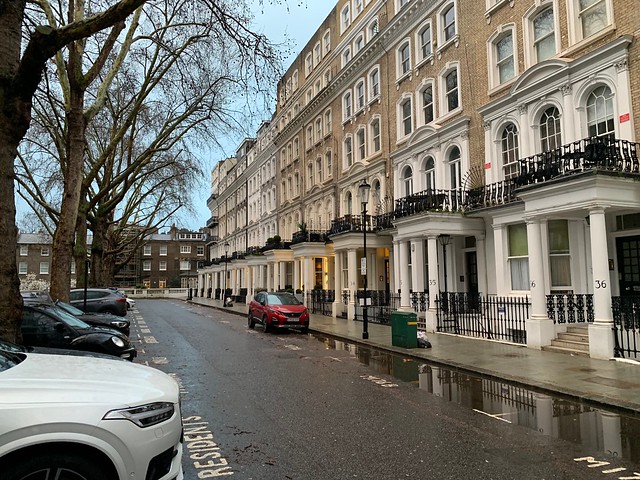 Sharon and I were both up and moving shortly after 5 am. When we arrived ten days ago, we arranged for a cab through London Connections to pick us up at 7 am and take us to Heathrow. With the light early Sunday morning traffic, we were at the airport by about 7:40 am. The three of us breezed through the luggage check and security.

While Sharon and my flight boarded at 9:10 am, Jack's flight didn't leave until after noon. Sharon and Jack went and got him a day pass for the United lounge. Afterwards, we grabbed a quick cup of coffee and a breakfast sandwich.

I really enjoyed having a chance to spend the ten days with Jack!

Sharon and I boarded on time a little after 9 am and the flight left on time. We had upgraded to United Plus seats. I actually sat in the middle for the entire flight and let Sharon have the aisle!

At eleven plus hours, it was a long flight. Unfortunately, the cold that I had been fighting at the end of the trip started to turn into a nasty upper respiratory infection. I pity the person sitting next to me on the window; I coughed for eleven straight hours.

I tried to sleep once or twice, but couldn't. I spent most of the flight with my nose in my book: The Passage of Power. There was a long particularly powerful section following the events of the Kennedy assassination from Lyndon Johnson's perspective.

Although the flight tracker kept saying that we were going to be 30 minutes early, we ended up landing and getting to the gate a little after 2 pm; ten plus minutes late. Jack landed in Washington DC at almost the same time.

We breezed through customs, but had to wait a while for our bags. Leaving the international terminal, we had expected someone to be waiting for us. After some running amok that included finally calling the car service, we met the car at the curb.

Given how bad I felt and the fact that it was pouring rain, I was very glad that we had arranged for someone to pick us up. I slept most of the way from San Francisco to Carmichael. We pulled up to the house about 5:30 pm. It was a great trip!
By Heringer at 3/10/2019 11:59:00 PM