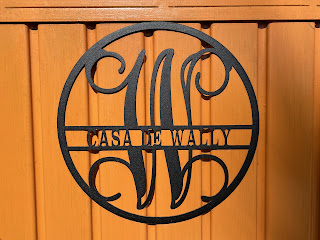 With a two hour layover in Orange County, we had breakfast at Ducks Breakaway [vegetarian omletts]. We caught a 10:45 am Southwest flight to Cabo San Lucas. Boarding with A50 and A51, we were able to get the middle and window in the nice exit row. As I have said before, I just don't understand why people don't pay more attention to the exit rows on Southwest flights.

It was an easy two hour flight. We were on the ground in Cabo by 2:00 pm. Getting through passport control and customs was fairly easy. I had forgotten what it is like coming out of customs in a Mexican airport. There are a million people trying to grab you and sell you something.

Eventually, we hooked up with the Hertz representative. After a quick shuttle ride, we picked up the VW SUV. Taking the toll road around Cabo, we headed to Todos Santos. I was surprised how long it took; the drive was almost an hour and twenty minutes.

With one wrong turn, we rolled up to the Wallen's house about 4:30 pm. We are spending four nights with them. They built a house in Todos Santos that was finished in late 2020.

After getting settled in and visiting for a while, we wandered down to Scott and Gail's house. We spent some more time visiting there before the six of us headed to dinner.