Up early, I shamed Wallen into an early morning run. For forty plus years, I have said that one of the reasons that I train so hard is so that I can run with Wallen a couple of times a year. We ended up running and walking about 3.6 miles in 52 minutes. Wallen's hip started to brother him so we walked the last mile.

We ended up at Las Tunas Coffee Shop just as it opened at 8 am. Grabbing a table, Sharon, Jill and Elle drove up a few minutes later. Scott, Gail and their son Matt eventually walked up. Both Sharon and I had hot cakes.

Wallen, Sharon and I wandered about a mile back from the coffee shop to the Wallen's house. While Jill and Sharon watched My Octopus Teacher, Wallen and I facetimed with Nooter. It sounds like he is going to come to Bachman's celebration of life.

The four of us headed into town about noon. Wallen and I camped at Todos Santos Brewing, while the girls went jewlery shopping. We ended up having lunch at the brew pub. I had a Todos Santos Burger [Fresh ground local beef, fresh lettuce and tomato, caramelized onion, cheddar cheese, and bacon], while Sharon had fish and chips.

We had a lazy late afternoon, Sharon took a nap. I took a dip in the pool and started a new book: Sooley by John Grisham. 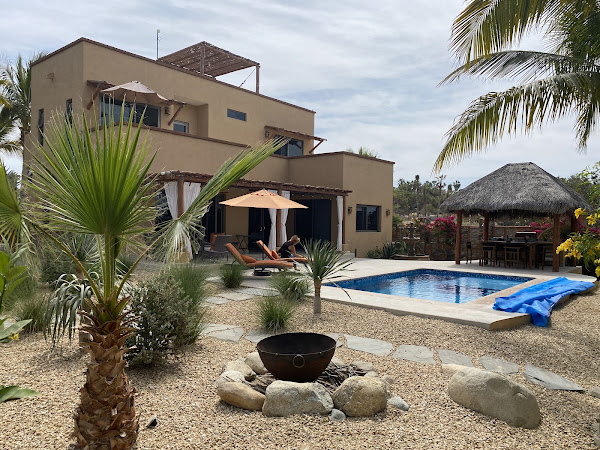 In the late afternoon, we headed to a potluck birthday party for one of the Wallens neighbors. It was a group of 40 plus people, almost all Americans living in Todos Santos.

Sharon and Elle ended up playing bocce ball as a team. They bested all comers and took home the prize. Heading back to the house, we crashed fairly early.
By Heringer at 4/30/2022 11:59:00 PM