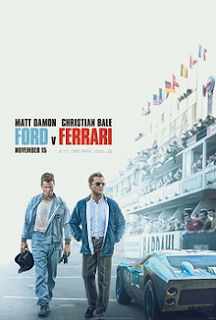 Sharon and I have started our annual quest to see all of the films nominated in the major Oscar categories. At this point, we are guesting which films will be nominated. Saturday night, we went to see Ford versus Ferrari at the Country Club Cinema.

The film follows a team of American engineers and designers led by automotive visionary Carroll Shelby and his British driver, Ken Miles. They were dispatched by Henry Ford II and Lee Iacocca with the mission of defeating the perennially dominant Ferrari racing team at the 24 Hours of Le Mans race in France. The plot follows the real life events pretty accurately!

Matt Damon plays Carroll Shelby, while Christian Bale plays Ken Miles. Bale is a chameleon; it is hard for me to believe that he is the same person that played Dick Chaney in Vice.

I enjoyed the movie, but not as much as Once Upon a Time in Hollywood. It will be interesting to see if the movie is nominated for best picture. I would probably bet that it will. My guess is that Bale is more likely to get a nomination for his performance than Damon would be for his...
By Heringer at 11/16/2019 11:59:00 PM