This was a moving day. As an aside, I don't recommend the Courtyard Manchester-Boston Regional Airport. This was not originally built as a Courtyard. It is an older hotel converted into a Courtyard. We won't stay here again.

Packing up the room, we were in the car headed to the airport about 8:30 am. We had a couple of omelets for breakfast across from our gate at The Local @ MHT. We took a 10:25 am Southwest flight from Manchester back to Baltimore. Boarding with A27, I wasn't able to get an exit row on an older 737-700. 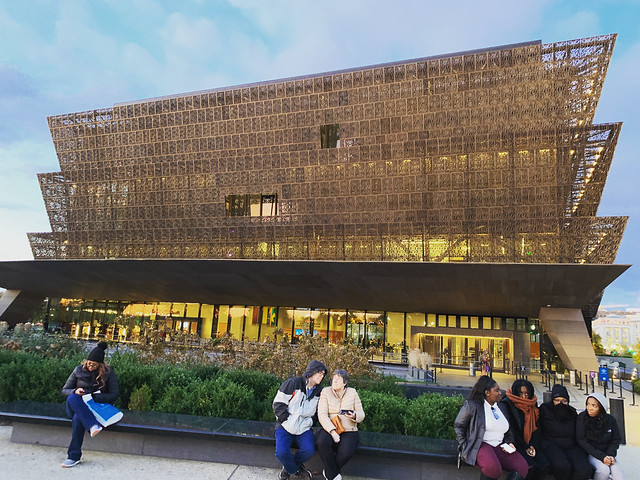 After a quick bite at the bar in the hotel, we headed to the National Museum of African American History and Culture. I didn't know what to expect, but was surprised by the experience. The displays are very dense with information. It seems like you could spend a couple of days reading all of the displays and watching the film clips.

It is poignant that I am reading a book about Andrew Johnson that focuses on the years after Lincoln's death. More on that book in a future post. It seems like reconstruction would have gone very different if Lincoln had lived.

Back at the hotel, I did a quick twenty minutes on the treadmill. After getting cleaned up, we headed into Georgetown. We met Jack at Bar à Vin.

The three of us had a late dinner at Chez Billy Sud. We had dinner at this restaurant in June. Jack had GNOCCHI PARISIENNE [cauliflower, hazelnuts, sage, aged goat cheese, black truffles]. I had SAUMON ROTI [potato crusted Scottish salmon, hen of the woods mushrooms, spinach, lemon beurre blanc]. Sharon had STEAK FRITES [Allen Brothers strip steak, pommes frites, sauce béarnaise]. The food was solid, but Sharon was a little underwhelmed.