To SoCal and Back 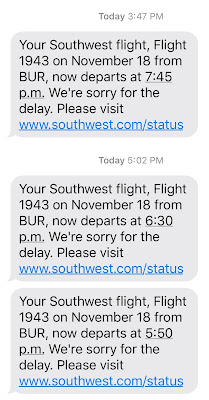 Up at 3:30 am, I took off for the airport at 4:35 am. I took a 6:20 am Southwest flight from Sacramento to Burbank. Boarding with A7, I was able to get the nice aisle exit row seat on a 737-700. With my boss and the Cerner ITWorks leader on the flight behind me, I sat and had breakfast at the Burbank Airport.

We spent the day rounding with the market IT teams and going to the IT Governance meeting at our Glendale and Simi Valley hospitals. With all of the running amok this year, we haven't spent enough time visiting the markets. More on the last year at work in a future post.

We dropped the rental car and hustled to the gate. As we were going through security, they announced that they would be boarding our flight in two minutes. I ended up getting to the gate just before they started boarding. Loading with A35 and climbing up the back stairs, I ended up in the less desirable exit row seat in an older 737-700. The flight eventually left about 6:00 pm. I got home just before 8:00 pm.

I originally hoped to have dinner with Drew and Shannon. I just couldn't figure out how to make it work with everything else that is going on this week.
By Heringer at 11/18/2019 11:59:00 PM