Previous Day
THURSDAY APRIL 20, 1995--after three straight days of doing tourist stuff and with my flight leaving early tomorrow, the plan for today was less ambitious. rob and barb are still struggling with the rental agent trying to get the problems with the kitchen fixed.

barb's driver took me over to rob's work in the late morning. going to his work made me realize that not all of the buildings that I thought were apartment buildings are really apartments. when the driver dropped me off in front I was thinking why the hell is he bringing me here. sure enough it was his office and did look like one of the hundreds (thousands?) of other buildings i had seen. rob pointed out accurately that the windows in his building were bigger than those used in the apartment building version of the building. rob indicated that it was some of the best office space in moscow. the inside of the building reminded me of some of the older buildings on the UC davis campus. overall it made me realize that a number of the buildings that I had assumed were apartments were really not. some of this goes back to my earlier comment about the buildings not being marked on the outside. barb had a good remark earlier in the week about how when the russians find a good design they stick with it.

rob and i had lunch in the russian cafeteria in the building. it included some fish soup, meat, potatoes and bread. after lunch, rob an i were trying to delete an email that i had sent him from dallas from my hand held computer on my way to moscow. any time he read the email it would crash his system. as part of doing this and trying to add a password to his account, i deleted all of his email and folders. i felt pretty bad. rob's comment was "computer expert comes to moscow, deletes email." rather than try to make a bigger mess, rob called their russian systems support person to come in on friday and try to restore his stuff.

from here we took the company's van back to park place to pick up some furniture to move to the new apartment. we loaded up a fair size couch plus some smaller stuff. getting the couch up three flights of stairs was a pretty big job, but not impossible. one unsettling thing happened. while we were working to get the couch up the stairs, rob dropped a screw driver out of his back pocket. when he went back to get it, it was gone. this was not a good start for the new apartment building. we got back to park place fairly late, fixed dinner and had a short but wide ranging discussion on my impressions of russia (more on that when i have a keyboard) and philosophy of life in general. given that we had to get up at 4:30 am to go to the airport we turned in pretty early....

click on the picture for a larger copy!
Their New Apartment 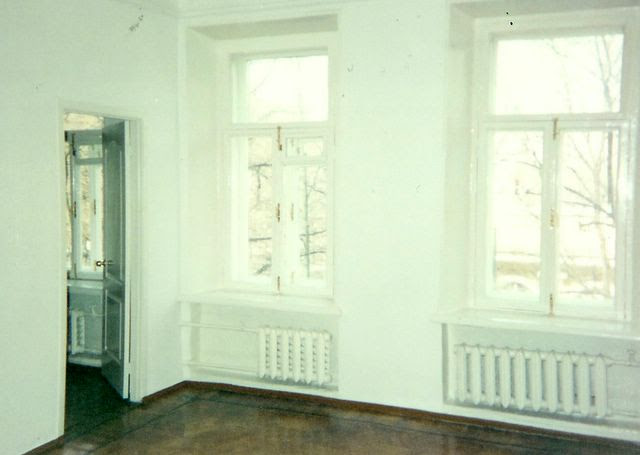