Previous Day
SUNDAY APRIL 16, 1995 11:59 pm -- we got an early start to a fairly large market that is located almost an hour away. the market mainly caters foreigners with a wide range of russia crafts and art work. we took the kids in a stroller plus the nanny and her friend.

since i have been here, rob has been driving a full size ford econoline van that belongs to the company. moscow traffic is pretty wild. rob has likened it to the traffic trying to leave a football stadium parking lot after a game. only it is this way all the time and everything is moving full speed. there are lots of sections where the road is six or eight lanes wide and there are no lines painted. while the weather was partly cloudy on saturday, it was bright and cool on sunday.

the market was interesting although a number of the "traditional" crafts do not appeal to me. one example of this are "matroishka" dolls which are egg shaped figures that stack inside each other. While most were traditional Russian characters, some were american sports heros; pretty wild stuff. rob and barb spent the end of the afternoon shopping for rugs for their new apartment. there was an amazing assortment of new and old rugs.

the drive to and from the market was pretty eye opening. moscow is primarily a city of apartment buildings; there are no single family residences like you would in america. so on the drive to the market and back it was nothing but apartments 30 to 40 miles of 10 to 30 floor apartment buildings. the buildings are spaced pretty far apart rather than being right next to each other. this time of year there is no grass so that the spaces between buildings are dirt.

after an early dinner, rob and i took a long bus ride to the downtown to an irish pub. we sat at the bar and drank guiness most of the evening. the main bartender was from claire ireland, was named locky and was kind of a character.

afterward we walked across the moscow river with a great view of the kremlin at night. the problems associated with reading the signs were quickly reenforced. we got turned around trying to get to the right level [on the subway] and it took a few minutes of studying the signs and the names on the signs in this wild alphabet to get going in the right direction.

when we got to the end of the line which is where their current apartment is, rob bought a couple of beers from a kiosk on the street. it turned out that they were some kind of beer with vodka in it that was so bad that neither of us could drink it.

click on the picture for a larger copy!
Their Apartment Building 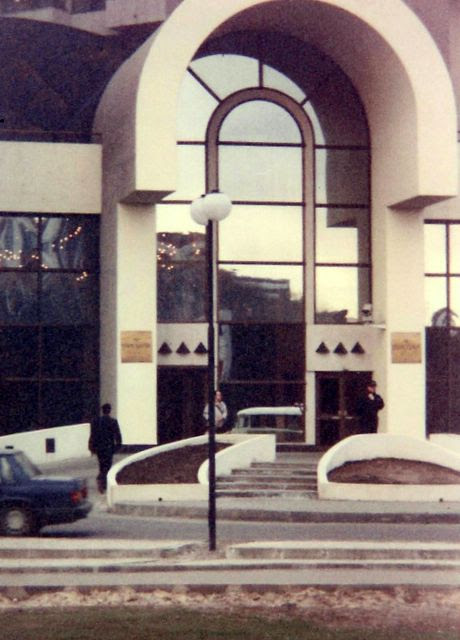 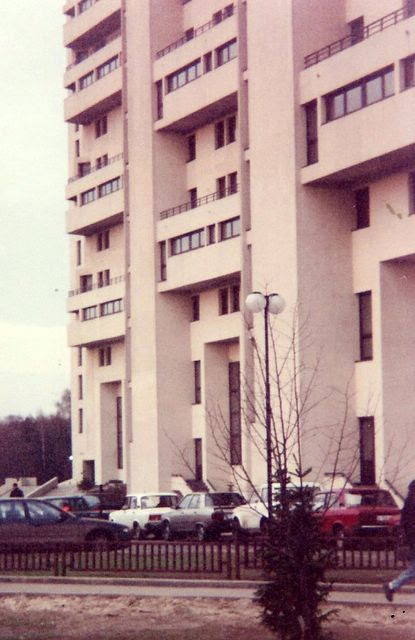