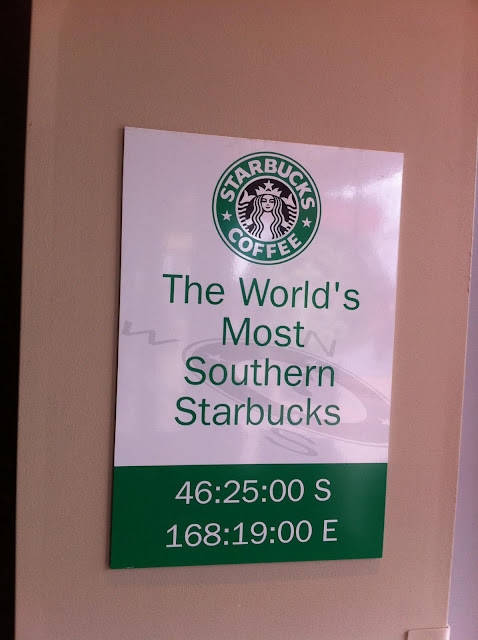 Although we got a very slow start to the day, I was very satisfied with the end result. Hunter, Deb, Swedberg and I had breakfast at the B&B. Waiting for Hunter and Deb to get ready after breakfast, it took us a while to get on the road. We made a stop for gas; it costs almost $8.00 a gallon. From there, we headed to the Starbucks. It claims to be the Southern most Starbucks in the World. Talking to Geselbracht later, he pointed out that the latitude is about similar to Vancouver, British Columbia.

It took a while to drag Hunter away from the wifi and his email, but eventually we started towards the Catlins. I was not paying attention to the GPS or my iPhone we got started off slightly in the wrong direction.

The plan for the day was to head to Curio Bench. When we were almost there, Swedberg spotted Tomasin's car at the Niagara Falls Cafe. Tomasin had texted me earlier that they were also planning to head for the Catlins. We joined the Tomasin's and the Geselbracht's for lunch.

From there we headed to Curio Beach. This beach is home to a petrified forest. I was not expecting much but was pleasantly surprised at the number of petrified trees that you could see in the rock. Hunter and I spent some time exploring the length of the beach. I was amazed at how much child like wonder Hunter brings to this kind of experience; it was like exploring the beach with an 8 year old

The next stop was McLean Falls. This was a 40 minute hike through what felt like a tropical rainforest up to a very nice waterfall. The vegetation was very different than anything that we had seen so far in New Zealand. The waterfalls exceeded my expectations.

We wound our way back to the B&B and then headed to the Ascot Place Sports Bar to watch the USA versus Russia World Cup Rugby game. We finally got the whole group together for the first time in a couple of days. USA won the game by the score of 13 to 6. 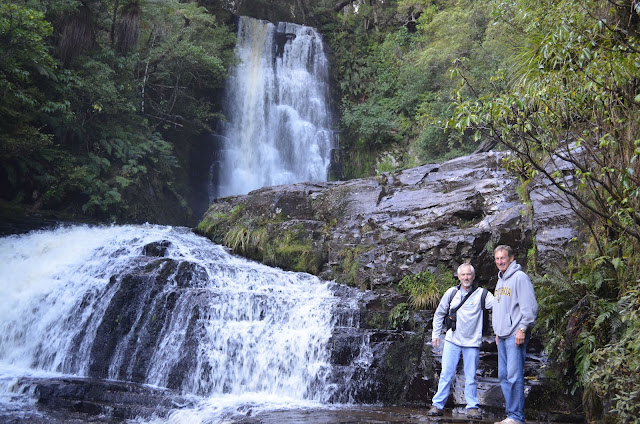