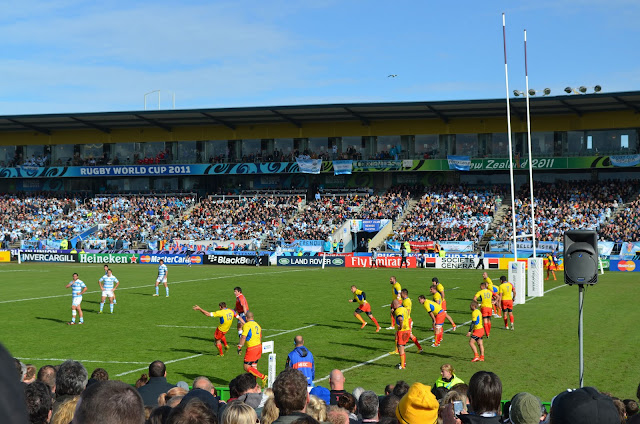 After three nights at Home Stay B&B's in Invercargill, we are starting north today. I had a lot of trepidation about the B&B when I first walked up to it, but it turned out o.k. This was due partially to the fact that we stayed pretty active and got out for the day.

It took us awhile to get going. By the time, we had breakfast with our hosts, packed and loaded the cars, it was after 10:30 a.m. We stopped to put more expensive gas in the van. Hunter and I spent some time at Starbucks logged on to the wireless, while Deb et al shopped. I was more impressed with downtown Invercargill than I expected to be.

Some of us met for lunch at O'Shea's Irish Pub for a quick bite to eat before the game. I ended up going with Tomasin to transfer some of the luggage to one of the vans; the luggage for four people will not fit into the one car that we have.

Afterwards, we headed to an afternoon rugby game. This is the last of the five Rugby World Cup matches that we will see. We saw Argentina play Romania. Argentina whopped Romania by the score of 43 to 8. We had general admission tickets and ended up standing in the south end zone. The weather was beautiful.

When the game was over, we loaded the cars and headed to Te Anau for the evening. We are spending one night at the Distinction Te Anau Hotel and Villas. After a couple of brief brushes with the law, we ended up in the The Moose next store to the hotel having a bite to eat and watching Ireland beat Australia by the score of 15 to 6.

Although I usually pack enough clothes so that I don't have to do laundry, I got my pants very dirty on the Stewart Island hike. Consequently, I decided to wash a couple of pairs of jeans. By the time that the laundry was done and I got down to bed, it was almost 12:30 a.m. We are heading to Milford Sound tomorrow.
By Heringer at 9/17/2011 11:59:00 PM