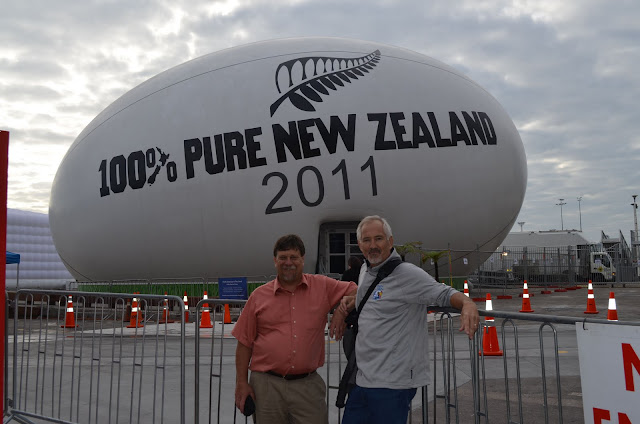 In spite of a pretty full plane, I ended up having a row to myself on the flight from San Francisco to Auckland. I was able to stretch and get some sleep.

After a 12 hour flight and a 19 hour time change, we were on the ground at 5:30 a.m. on Thursday. It took us about an hour and a half to get through customs, collect our luggage and get to the hotel. As part of the tour, there was a van waiting at the airport to take us to the hotel.

Dropping our luggage at the hotel, we walked about 20 minutes to the waterfront and the downtown. Both Tomasin and I bought jersey's for Mikey and Jack. We found a place to have breakfast and then headed to Sky City to pick up our game tickets for the next two weeks. We will be seeing five games over the next 10 days, including three in Auckland and two in Invercargill.

Heading back to the hotel to check-in, Tomasin and I took off cross country over a couple of hills and through several parks and a university campus. It turns out that I may have my own room for part of the tour. Swedberg's sister and her boyfriend cancelled at the last minute and at least some of the rooms were prepaid. There is an extra room that I am using for the next four nights rather than bunking with Hunter.

After getting checked in, we finally caught up with Hunter. Hunter, Tomasin and I headed to Parnell Road near the hotel to explore. We had a light lunch at a very nice causal Italian place (I am going to have to figure out the name later) and then pub crawled down the street. We ended up talking to the chaplain for the USA Rugby team.

From there, we found a market and got some provisions. The rooms have small kitchens with little refrigerators. I am actually pleasantly surprised by the rooms. They are big with a sitting area and a view of the Auckland harbor.

The Swedberg's and Holland's headed down to the harbor for dinner. Eventually, we grabbed a cab and caught up with them at the restaurant. While Hunter wandered off, Tomasin and I caught a cab back to the hotel. After being on the move since Tuesday morning and only sleeping a little on the plane, I crashed hard in the room a little after 9:00 p.m.
By Heringer at 9/08/2011 11:59:00 PM