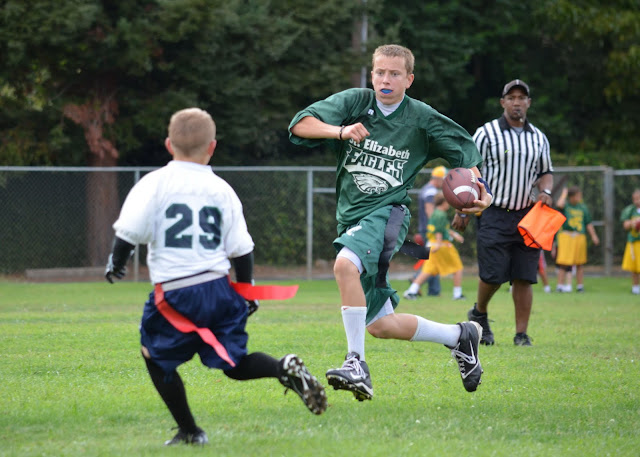 While I was in New Zealand, Jack's flag football team, the SEAS Eagles beat St. Ignatius on September 11. Their only loss in divisional play last year was to St. Ignatius.

On offense, Jack played wide receiver. With Joe playing quarterback, Jack caught three long touchdown passes. On two of the catches, Jack was running a GO pattern and Joe hit Jack in stride for the touchdown. Joe threw a dying duck that Jack went up and caught in a crowd for the third touchdown. There was actually a fourth long touchdown catch that was called back because Joe had crossed the line of scrimmage before he threw it. Jack also caught a short pass for a two point conversion. Jack was covered tightly in the end zone with a man in front of him, but Joe threw a bullet that Jack went up caught. While Jack is not particularly tall, he was a head taller than Holy Rosary's defensive backs.

Jack also returned both of Holy Rosary's kickoffs [half-time and after their only score]. Both times, he was called for flag guarding. The first time for pushing off the defender [just after the picture above] and the second time for jumping.

On defense, Jack played defensive back. He had one interception. Jack also mistimed a jump for an interception and allowed a long reception. Holy Rosary failed to score as the clock ran out in the first half.

Jack played every down on offense and all but about four or five downs on defense. The only Holy Rosary score came on a pass when Jack was out of the game.