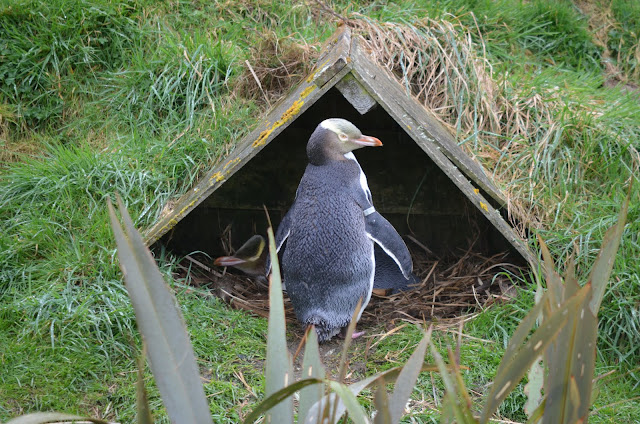 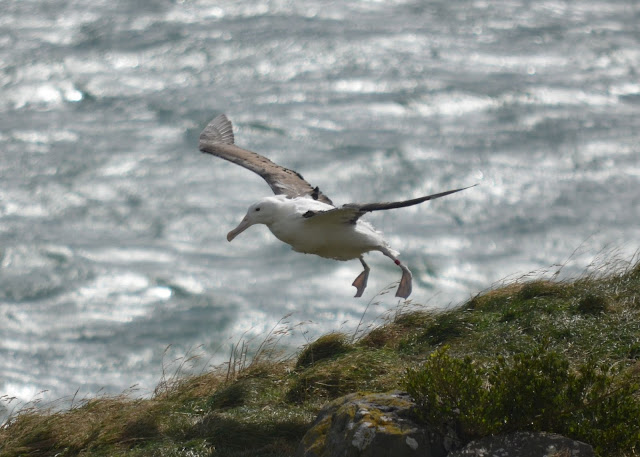 Up fairly early, I wandered the grounds of the castle and took a few pictures. After yesterday's rain, the morning was very nice: clear, cold and windy. Our stay at the castle includes breakfast. After breakfast in the carriage house, the entire group loaded up and headed off to explore the Otega Peninsula.

The goal for the day was to see penguins. We headed to Penguin Place. After a brief talk on the penguins, we loaded into the bus and headed towards the beach. We ended up seeing about a dozen yellow eyed penguins, a couple of seals and two blue penguins. They have a series of blinds and houses built on the beach. These penguins traditionally live in the forest. The organization is working on restoring the habitat. In total we spent over two hours here. It rained for about an hour in the middle of the tour. While I had some initial trepidation about how much we would get to see, I was very satisfied with the end result!

From there, we continued up the peninsula to the Royal Albatross Center. After some debate about who was going to do what, Tomasin, Hunter, Deb and I went on the Albatross and fort tour. After a brief film, we went to a hilltop observation center. We got a chance to watch two eight month old chicks work on their first attempt to fly. It was very cool. From there, we took a tour of Fort Talaroa and the Armstrong Disappearing Gun. This was also definitely worth the price of admission.

Afterwards, Tomasin, Hunter, Deb, Julie and I had lunch at the Portabella Hotel Bistro. Most of us had a nice bowl of seafood chowder.

By the time, we got back to the castle, it after 4:00 p.m. Geselbracht and Barb had arrived. The size of the group is now twelve.

For the second straight night, we had dinner in the castle. I had beef. We were in a different room than the previous night with two Australian couples. It turned out that the husband of the older couple sitting across from us was a vet who known someone that Hunter knew at Davis and was from the same small town as Tomasin's cousins. Although the service was slow and we had to listen to the story about the castle for the second time, I enjoyed the evening.