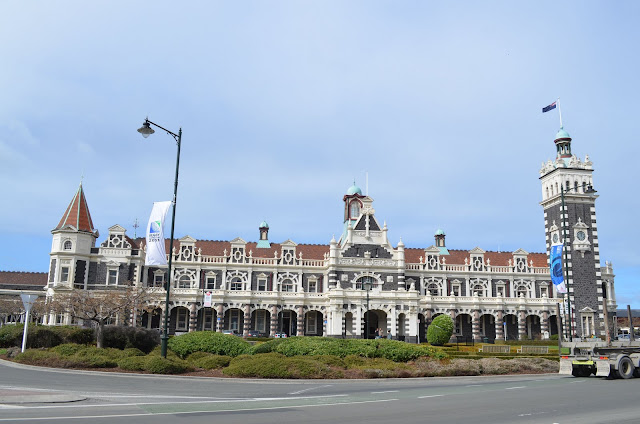 Tomasin and I wandered the grounds of the castle before breakfast. After breakfast in the carriage house, we packed up and loaded up the cars.

The group spent two hours exploring downtown Dunedin. The main square is shaped like an Octagon. Wandering around with Tomasin and Julie, we eventually wandered down to the train station (pictured above) and then headed back to the cars.

It was a two and half hour drive from Dunedin to Invercargill. We made a quick stop for lunch along the way. It is interesting country. Most of the road was rolling green hills with thousands and thousands of sheep. I have never seen so many sheep in my life. It is spring in New Zealand and there are baby lambs everywhere.

We are spending the next three nights in a Home Stay Bed and Breakfast. The group is spread out over three different B&B's. Hunter and I plus the Swedberg's are staying at one place, Tomasin's and Geselbracht's are at another and the Wren's and Holland's are at a third. This will be a little different.

After getting to the B&B, unloading and having a quick bite with our hosts, we took off the rugby game. We saw Scotland play Georgia at Rugby Park Stadium. It started to drizzle just after kick-off, but Hunter and I were about 20 rows up and very dry and comfortable under the roof.

In game full of penalty kicks, Scotland beat Georgia by the score of 15 to 6. We were sitting in section packed with loud Scot's.

After the game, we split the group up into two vans. While one van headed back to the B&B's, the other stopped at Cobb & Co. It was after midnight by the time I was back to the place that we are staying and out for the night. 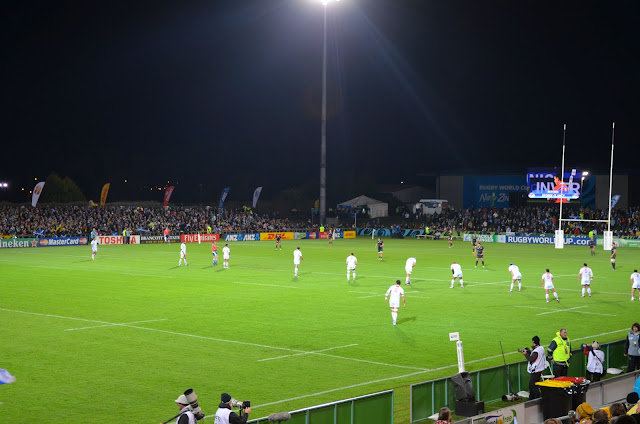