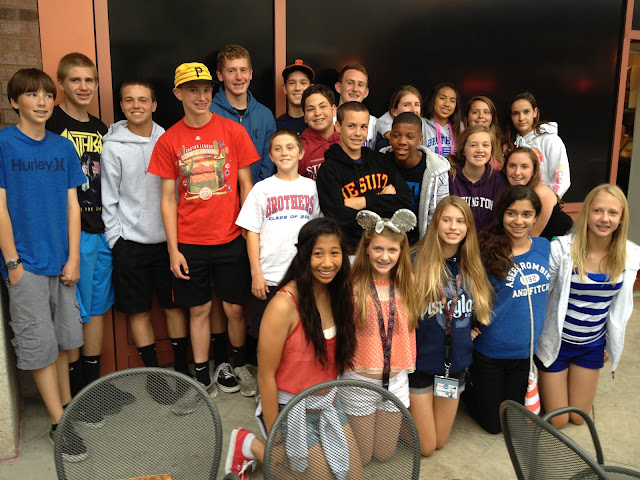 Up fairly early, Sharon, Jack and I had breakfast at the hotel and then headed to Disneyland. Sharon and I grabbed a FastPass for Star Tours and then the three of us jumped into the stand-by line. Afterwards we headed to Frontierland and rode the Pirates of the Caribbean.

At this point, several of Jack's classmates were getting to the park. He took off and Sharon and I got in the line for Indiana Jones. The line moved pretty fast, but the ride broke down for about 10 or 15 minutes just before we got on before starting back up again.

Using FastPasses effectively, Sharon and I were able to cover a lot of ground before lunch. We went on Star Tours twice, Indiana Jones, Pirates of the Caribbean, Big Thunder Mountain and Splash Mountain all by noon.

I would like to be able to ride the Star Tours ride a few more times to be able to see all of more variations. The ride has four components: a beginning (storm troopers or Darth Varder); an initial planet (Hoth, Kashyyyk or Tatooine); a hologram (Yoda, Ackbar or Leia), and; an ending planet (Coruscant, Naboo or Death Star). All of these combine to make 54 different variations. This year I saw Storm Troopers, Hoth, Ackbar and Death Star and Darth Varder, Tatooine, Yoda and Coruscant. Last Year, I saw Storm Troopers, Hoth, Yoda and Coruscant and Storm Troopers, Tatooine, Leia and Couruscant. There are still two segments that I have still not seen: Kashyyyk and Naboo.

Sharon and I had a nice lunch at the Uva Bar in downtown Disney. Heading into California Adventure, we rode the Grizzly River Run. Soaking wet, we headed back to the hotel. While Sharon took a nap, I ran 6 miles on the treadmill.

Getting cleaned up, We bumped into Denise in lobby and grabbed a cab to the Grand California Hotel. We had a drink in the bar and then joined everyone at the ESPN Zone for a group dinner.

While the kids roamed the parks, Sharon and I finished the night with a group of parents having a glass of wine at the Wine Country Trattoria in California Adventure. We had intended to ride the Tower of Terror, but the line was 95 minutes long when we went there the first time and the ride was closed when we wandered back the second time. Eventually, the group wandered to Disneyland and rode the Jungle Cruise.