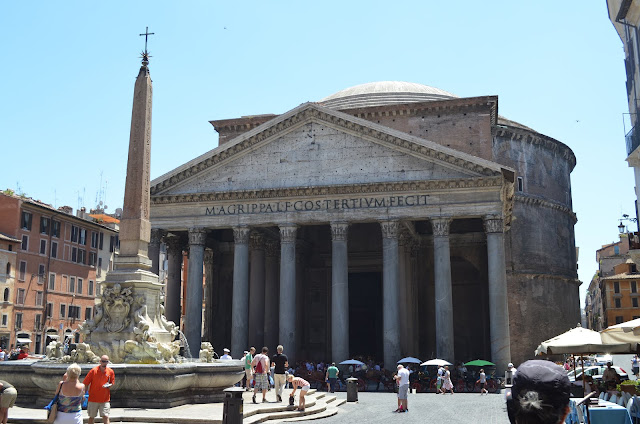 With the delay getting off the ground in Philadelphia, we got to the Rome airport after an uneventful flight about an hour late. We hit the ground about 9:30 a.m. rather than the scheduled arrival of 8:40 a.m. We breezed through customs. I am frankly surprised how quickly we got our luggage and were looking for taxi.

At this point, we realized that we had made a tactical error. Typically, we stop at an ATM and get local currency when we hit the ground in a foreign country. We couldn’t get any of the ATMs to work. I ended up gathering up our US dollars and went searching for someplace to change the dollars in Euros. After passing a bunch of exchange kiosks before we went through customs, it took some work to find one in the arrival area. As I noted in Spain two years ago, it is odd to have another voice (Jack’s) with input into the discussion about how to deal with these bumps.

We finally got some money, caught a cab and headed into the city. We will be spending the next three nights in Rome. We have an apartment right off of the Piazza Navona. Morgan spent a couple of weeks on the Greek Island of Cor fu, took an overnight ferry to Italy, spent a couple of days with a friend and then got to the apartment in Italy last night. She will be traveling with us for the next two weeks.

After some initial confusion, we finally got into the apartment, found Morgan and got settled. We had a bite to eat in a pizza place that Sharon had found in a magazine: Pizzeria La Montecarlo.

From there we headed off to explore. We wandered through the Piazza Navona and headed towards the Pantheon. This is the only Roman temple to survive the last 2,000 years virtually intact.

From there we wandered through Sant’ Ignazio di Loyola. This is a Jesuit Baroque church built in 1685. When Sharon and I were here before, it was filled with scaffolding.

The next stop was Galleria Doria Pamphilj. This is described as the best of the private collection galleries in Rome. It includes three of Caravaggio’s works: Mary Magdalene; Rest of the Flight into Egypt; and, Young St. John the Baptist.

Trying to work off the jet lag, we headed back to the room and slept for about two and a half hours.

While Jack took a shower, Sharon, Morgan and I went to the San Luigi del Francesi. This is France’s national church in Rome. It contains three large Caravaggios: The Angel and St. Matthew; the Martyrdom of St. Matthew; and, the Calling of St. Matthew. They are very impressive.

After getting cleaned up, we headed off on a walking tour. We used one of Rick Steve’s book to take a “Heart of Rome” walk. I really enjoyed this. Starting in the Piazza Navona, we went by the Pantheon and made our way to the Trevi Fountain. There were two interesting moments along the way. We passed an Egyptian obelisk taken by Augustus after his victory in Egypt over Cleopatra and Mark Antony. I just finished reading the book—Cleopatra—that talks about this battle. We also passed a huge second century column depicting the victories of Marcus Aurelius over the barbarians. Jack watched Gladiator on the plane on the iPad which portrayed these battles.

From the Trevi Fountain, we headed to the Spanish steps. We eventually found a place to have a late dinner in the neighborhood. After dinner, we found our way back to the Trevi Fountain and back to the hotel. We stopped at Giolitti’s for gelato. By the time we got back to the apartment and to bed, it was after midnight. All in all, a very successful first day in Italy!
By Heringer at 6/23/2012 11:59:00 PM