It has been hot with temperatures peaking in the high 90’s. Although we had a late night, I was up even earlier than yesterday. I couldn’t sleep much pass 6 a.m. I got more pastries from the bakery around the corner.

The plan for the day was a guided tour of the Vatican Museum tour ending with the Sistine Chapel and continuing into St. Peter’s Basilica. After talking about walking, we decided it was just a little too far and caught a taxi just behind the apartment.

Sharon had booked the ancient Rome and Vatican Museum tours with the company that the Wackman’s used last year. In a twist of fate, we ended up with the same guide as the first day: “Elvis.” Totaling twelve people, the group was twice as large as the previous day.

The Vatican Museum was literally packed with people. I believe that the guide said that 5.5 million people visited last year. One of the advantages of being with the guided tour was that you got to use a much shorter line. The line to get in the museum was more than an hour long, while the line for the tour groups was about 15 minutes. Once inside, the group got headsets so that we could hear the guide amongst all of the other people. We wandered through a good part of the museum catching a number of the highlights, including the Laocoon. Sharon had poked him at the beginning to make sure that we were going to visit the Raphael rooms. The School of Athens in the Room of Segnatura is particularly impressive.

I really enjoyed the Sistine Chapel. Although the room was packed, we spent quite a bit of time there. The guide did a very nice job of describing the features of the room. Given that we were wearing earpieces, I could wander fairly far from the group while listening to him talk.

Exiting the Sistine Chapel, we went into St. Peter Basilica and finished the tour. Highlights included the Main Altar (a seven story tall bronze canopy) and the Michelangelo Pieta. The church is huge!

After the tour, we wandered into the local neighborhood to get some lunch. I walked back to the front of the Basilica to get a couple of pictures. Eventually, we hooked back from at a store where Sharon was buying Jack a Roma jersey.

We passed by the Castel Sant’Angelo. Unfortunately, it is closed on Mondays. We crossed over the Ponte Sant’Angelo and started looking for a store that Sharon wanted to find.

Back at the apartment, everyone took a nap for the third day in a row.

With Jack still sleeping, Sharon and I headed out. Sharon wanted to go back to shop near the Spanish steps, while I wanted to get to the Church of Santa Maria del Popolo. When we were in Rome the first time, Sharon lead us to this church, but it was closed. It contains two Caravaggios: The Conversion on the Way to Damascus and the Crucifixion of St. Peter. Catching up with Sharon afterwards, we enjoyed a glass of wine before heading back to the room.

Jack has fallen asleep and slept for a couple hours every afternoon. Twice, he was woken up thinking that it was the next morning. When Sharon and I got back to the room, Jack woke up thinking that he needed to pack.

We wandered back by the restaurant that Patty recommended, but it was still closed. We finished the night with a very nice dinner near the apartment. Although we were trying to get to bed earlier, it was still after 11:30 p.m. by the time that we got to bed. 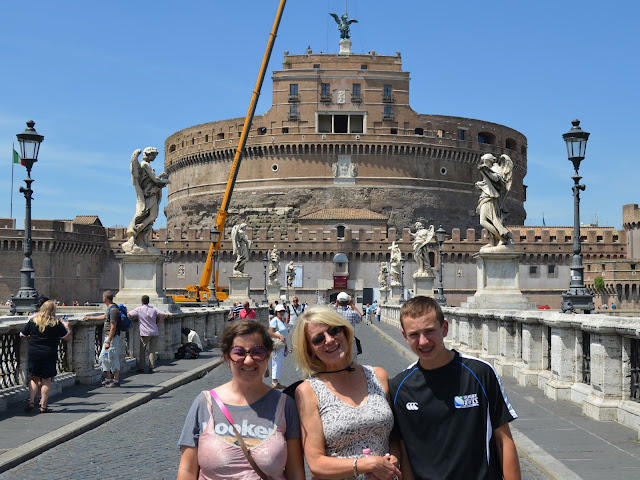