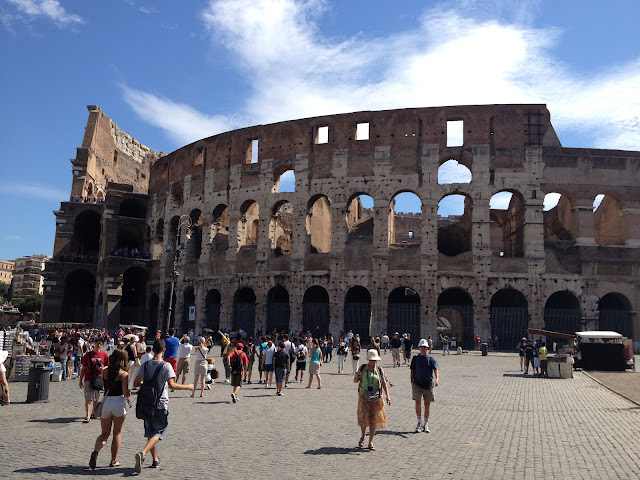 I set the alarm for 7 a.m. and was up and moving before everyone else. Prowling for somewhere to get breakfast, it was very cool to wander the Piazza Navona when it was completely empty. I wandered as far as the Piazza di Floria. I found a pastry shop that was just opening and carried a bag full back to the apartment.

The plan for the day is a guided tour of ancient Rome. We caught a taxi to the street near the Colosseum. We had a quick cappuccino and another pastry before meeting up with the guide. Unlike Spain, it turns out that there are no Starbucks in Italy; I would kill for a cup of American coffee…

We met up with the guide at 9:30 a.m. The group included the four of us plus one other couple. A guided tour is not something that we have done before. We have typically relied on guidebooks and walking tours. Sharon felt that Jack and Morgan might get more out of a guided tour and be more engaged.

The tour started in the Colosseum. A lot more of the amphitheater is open than when Sharon and I were there 16 years ago. We walked around lower and upper levels and stopped at a number of exhibits.

From there, we headed to Palatine Hill. The palaces of several emperors and the original village of Rome are located on this hill. Sharon and I had walked part of this before, but we covered a number of new areas.

We walked down ancient subway to the Roman Forum. This included a tour of the Curia, the Senate House. Overall, the guided tour lasted just over three hours. While I was initially skeptical, I felt that it was a worthwhile investment.

We had lunch at Enoteca Cavour 313, a place that the guide had recommended. After lunch, we walked up to the top of Capitol Hill and toured the Capitoline Museums. High points of these museums include: the She-Wolf; Marcus Aurellus on horseback; the Dying Gaul; and two Caravaggios (The Fortune Teller and another version of the young St. John the Baptist).

We walked back to the apartment past an excavation of early Rome that was near where Julius Caesar was murdered.

After a short nap, Jack and I headed out to a find a Roma jersey. He had seen a team store on the walk on the first night. Unfortunately, they did not have anything in his size. The season ended a couple of weeks ago and looks like they purposely let their stock of jerseys shrink. On the way back to the hotel, Jack and I stopped at a ATM and a grocery store.

For dinner, we went looking for a restaurant that Patty Wackman had recommended. Just off Piazza di Floria, I finally found it after one false start. Unfortunately, it was closed. We needed up going to a nearby restaurant that was listed in the Rick Steven’s book: Trattoria der Pallaro. It had a different atmosphere; their motto is “here, you’ll eat what we want to feed you.” Afterwards, Sharon, Jack and I headed back to the same gelato place as the first night.

Jack and I ended the night watching the Italy versus England European Cup soccer match in a restaurant off the Piazza Navano. Italy won on penalty kicks after the overtime. It was another late night. By the time we got everyone down, it was after midnight.
By Heringer at 6/24/2012 11:59:00 PM