After a lazy morning on Friday, the Outlaws had another 8 a.m. game on Saturday morning. Dragging Jack out of bed at 6 a.m., we headed out back to Council Bluffs. The 6th seeded Outlaws played the 11th seeded Denver Pirates.

At the plate, Jack was 0 for 1 with a walk, a hit by pitch and two runs scored. In his first at-bat, Jack ran the count full and drew a walk. He stole second and scored on Breyton's triple to right center. Jack was hit by a 0 and 2 pitch in his second plate appearance. He stole second, went to third on a wild pitch and scored on an error by the catcher. In his third at-bat, Jack hit a 0 and 2 pitch for a grounder up the middle. The pitcher made a nice play to reach backwards, stop the ball and throw Jack out at first.

In the field, Jack played all six innings at third base. He had two put-outs and two assists. Jack handled two grounders to the left side and threw the runners out at first. Josh had a nice dig on the second throw. Jack also handled a high pop-up to the left side and a line drive hit right at him. I am always amazed at how quick and soft his hands are; I am sure that if it had been me the line drive would have bounced off my chest before I could have gotten my glove up.

The Outlaws gave up a couple of cheap runs to the Pirates in the second inning, but the Pirates turned around and gave a bunch of runs back in the third. The Outlaws won the game by the score of 8 to 2. The box score is here.

With the win, the Outlaws advanced to the quarter finals of the D1 bracket. They were scheduled to face the winner of the White Sox Ace and the Gulf Coast Gurus at 1:30 p.m. Unfortunately, the thunderstorms moved in.

After lunch, the group headed back to the hotel. The plan for the afternoon was to see a college world series game. We went to the early game between Kent State and Arkansas. The Razorbacks won the game easily by the score of 8 to 1. 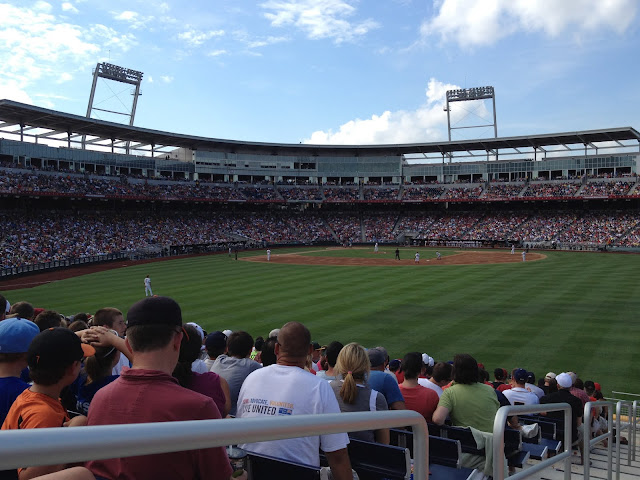 The boys got antsy about the 6th inning and wanted to head to the water park at the hotel. They ended up spending a couple of hours playing in the water park. I went out for a six mile run on the Keystone trail before catching up with the rest of the adults for cocktails.

At some point, Jack wandered up and said that he was starving. He and I went to a late dinner at a Mexican restaurant called Margaritas near the hotel. About the time that we finished eating, a large part of the rest of the group wandered in.

With the Outlaws not scheduled to play until 10:30 a.m. on Sunday, Jack and I watched some of Saturday Night Live before crashing.