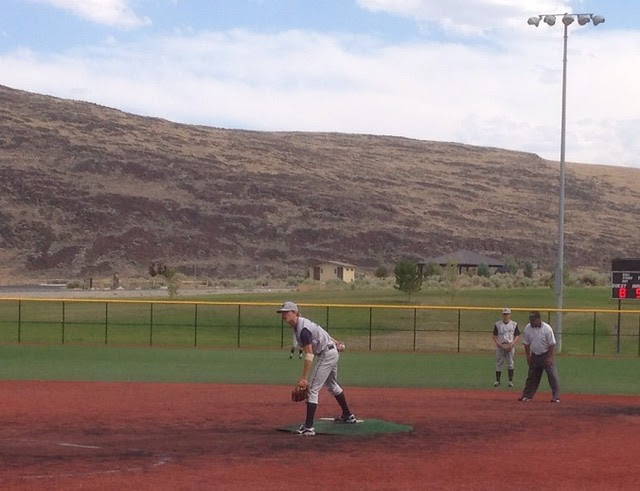 I went for an early morning six mile run in the morning along the Truckee River. We left the Grand Sierra about 8:30 am.

It was a long hot day... The temperature reached about 102 degrees in the afternoon.

At the plate, Jack was 2 for 4 with 2 runs scored. In his first at-bat, Jack drove a 3 and 2 to the right side. The second baseman made a great diving stop ranging far to his right, but couldn't get back up. Jack was safe at first. The Elite scorekeeper scored it as an error; there is no way that it should have been scored as an error. Jack went to second on Kyle's single down the third baseline and scored on Alex's fly ball single to right. Jack drove the first pitch for a line drive into centerfield in his second plate appearance. He came around to score again. In his third at-bat, Jack hit the first pitch for a hard line drive right at the pitcher. The pitcher made a great catch for an out. Jack grounded the first pitch to the shortstop and was thrown out at first in his fourth plate appearance.

In the field, Jack played seven innings in right field. He had two put-outs and one assist. In the bottom of the first inning, Jack caught a fly ball in short right field and fired the ball home. The runner tagging at third and trying to score was out by ten feet.

The Elite let the game slip away from them and lost by the score of 6 to 5.

After the two hour break, the Elite 15u played the Niles Raw Sluggers 16u in the second game of the day. With the outcome of the game having little impact on the seeding for pool play on Sunday, the coaches played a number of different players.

In the field, Jack pitched an inning for the first time in over a year. I couldn't have been more surprised when he walked out to the mound. Given the heat and a desire to save pitching for Sunday, I think that coaches asked for volunteers. Jack pitched part of the fifth and sixth innings. He threw 29 pitches: 19 balls and 10 strikes. Jack got three ground outs, walked three, was eventually charged with two earned runs and gave up no hits. I thought that he pitched surprisely well.

The game got away from the Elite quickly. The first Elite pitcher walked three pitchers in the first third of an inning. In total, the Elite walked 11 batters. Combined with a couple of errors at shortstop, the Elite ended up losing by the score of 12 to 5.

By the time, we got back to the hotel it was after 5:30 pm. The plan for the night was a group dinner at the Charlie Palmer Steak House at the Grand Sierra. The group included Alex's, Kyle S', Andrew's and Kyle R's parents. I finished the night playing blackjack with a couple of the dads until after midnight.