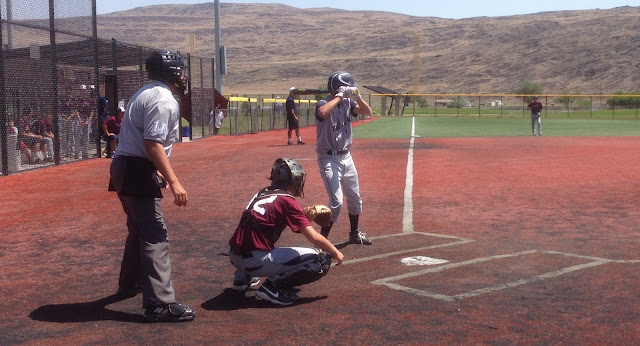 Packing up and checking out of the Grand Sierra, we headed back to the Golden Eagle Recreational Park. After three days of pool play, the Elite 15u was seeded second in the 15u elimination round. They had been playing 15u and 16u teams over the last few days.

Just as a side note, Jack is actually a 14u player playing on a 15u team against a number of 16u teams over the last couple of days. This means that a lot of the players that Jack has been playing against could be as much as two years older than him and are probably entering their senior year in high school.

The Elite played the Crimson Braves 15u in the first game of the elimination round at 10:15 am. This is a team from Auburn, Washington and is list as a Freshman Elite team.

Leading off, Jack was 2 for 3. In his first at-bat, he ran the count to 2 and 2 and then lined a pitch into right field for a single. Jack was almost caught off base when Kyle missed the sign for a hit and run and Jack stopped halfway to second. He ended getting forced out on a double play grounder from Kyle.

Jack crushed a high outside 1 and 1 pitch for a hard fly ball into the right field corner. Flying around the bases, he ended up with a triple! As Hank Aaron once said, "the triple is the most exciting play in baseball."

Unfortunately with one out, the Elite were not able to get Jack home from third. Kyle struck out and Alex flied out. As Jack was walking back to the dugout from third at the end of the inning, the home plate umpire told him that it was first triple he had seen during the tournament. The fences are relatively short making it difficult to get all the way to third. In his third at-bat, Jack grounded to the first pitch to the hole on the left side. The shortstop for the Braves was very good. He got to the ball and made a nice throw to first. Although everyone thought that Jack had beaten the throw, the umpire called him out.

In the field, Jack played seven innings in right. He had one put-out with a nice throw. On a fly ball hit to deep right center, Jack threw a bullet to the third baseman to hold the runner at second.

The Braves pitcher was very good. Although I didn't bring my radar gun with me on the trip, it looked like he might have been throwing almost 80 mph. I haven't clocked anyone above 73 this year.

Leading 1 to 0 in the top of the fifth, the Braves finally started to get to the Elite pitchers. The Elite ended up losing the game by the score of 5 to 1 and were eliminated from the tournament.