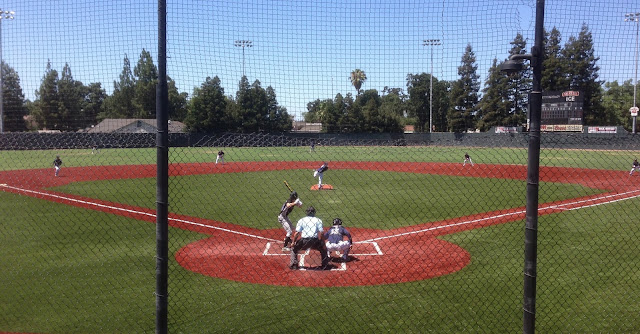 Jack played baseball with the Outlaws baseball team for the first time in almost six months. He played with the Outlaws in the second day of the USSSA Mid-Summer Classic. For the bracket after pool play, the Outlaws were seeded third out of nine teams and played the second seeded Lamorinda 14U. The game was played at Billy Hebert Staduim in Stockton. This is the old Stockton Ports minor league stadium and is a very nice venue. It is the first time that Jack has played here.

Josh, Jeremy, Breyton and Cooper were all playing for the Outlaws. Jack has played with this group over the last five years. From the core group that started together in 2009, only Trevor was missing.

Jack led off and played centerfield.

In the field, Jack played six innings in centerfield. He had four put-outs. Jack made a couple of nice catches. Covering a lot of ground, he made a sliding catch on a fly ball in shallow left center and went a long ways to make a catch on a hard hit ball to deep left center.