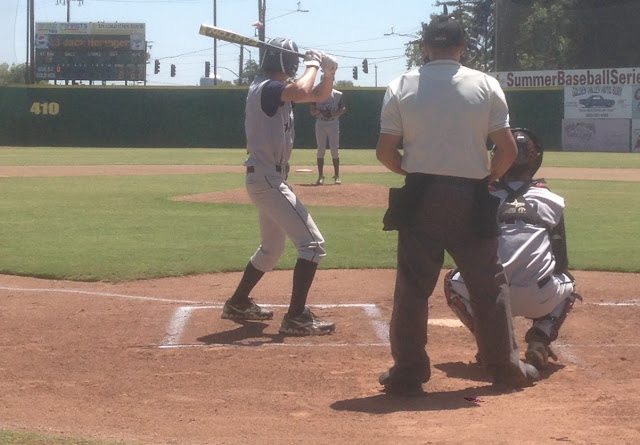 The Walbeck Elite 15u traveled to Yuba City High School to play the Golden Spikes 15u team in a wood bat game. While Jack has against the Golden Spikes before, I believe that was the 14u team. Working most of the morning of a go-live at work, I showed up late. The Roesslers took Jack to the game.

Leading off, Jack was 1 for 2 with a single and a walk. In his first at-bat, Jack walked on six pitches. He was out at second on Alex's fielder's choice to the right field. Jack hit a 1 and 0 pitch for a line drive to left field in his second plate appearance. He went to third on Alex's double to right field, but ended the inning there. In his third at-bat, Jack popped a 2 and 2 pitch up to the first baseman for an out.

In field, Jack played five innings in right field. He had no put-outs or assists.

After grabbing a quick lunch at subway, Jack and I headed to Appeal-Democrat Park. The Walbeck Elite 15u played a game against the Walbeck Titans 17u team. Actually, they mixed up the teams so that there were some 15Us and 17Us on each team.

At the plate, Jack was 0 for 3 with a walk and a run scored. In his first at-bat, Jack struck out swinging on a 1 and 2 outside pitch trying to protect the plate. Trying to lay down a bunt, he popped up the first pitch to the pitcher for an out in his second plate appearance. Jack was very upset with himself on this play. The third baseman was back and he felt that if he got the bunt down he would have been an easy single. In his third at-bat, Jack ran the count to full and drew the walk. He stole second, went to third on an infield error and scored on Aaron's single to right. Jack ground a 0 and 2 pitch to the second baseball and was threw out at first in his fourth plate appearance. After the game, he said that he had trouble seeing the ball in the last at-bat.

All of the pitchers that Jack faced were from the 17u team. Nevertheless, he was not happy with his performance at the plate.

In field, Jack played eight innings in right field. He had one put-out on a hard fly ball hit to the warning track.

After the game, the team and parents listened to a series of talks by the Gold Sox players and coach about playing baseball in college. There was then a team party at the Peach Tree Country Club. Upset with his play at the plate in the second game, Jack balked at going. He ended up have a great time playing ping pong and swimming in the pool.
By Heringer at 7/27/2013 11:59:00 PM