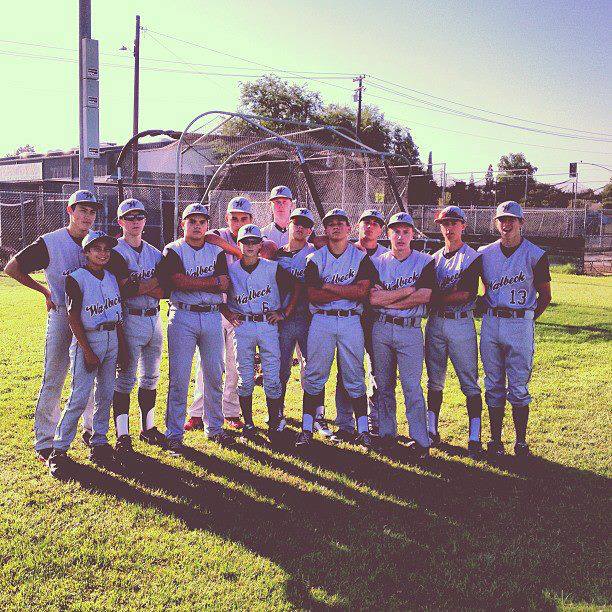 The Walbeck Baseball Academy Elite 15u team traveled to Marysville to play Granite Bay in a double header at Appeal Democrat Field. Sam, one of Jack's teammates from Jesuit this spring, was playing for Granite Bay. This is the fifth game that Jack has played at Appeal Democrat Field. While he has had some very successful tournaments and game this summer, Jack has not done well at bat in this stadium. I am not sure what to make of this...

Jack played right field. He had one put-out on a fly ball.

Behind a strong pitching performance by Marco, the Elite beat Granite Bay by the score of 2 to 0 in the first game of the double header. The Elite got 2 runs on four hits, while Granite Bay managed only 2 hits off of Marco.

After a short break, the boys turned around and played a second game at Appeal Democrat Field.

Leading off, Jack was 0 for 2 with a walk, reached on an error, a sacrifice fly and a RBI. In the his first at-bat in the top of the first, Jack grounded the seventh pitch to the third baseman. The third baseman couldn't handle the ball cleanly and Jack was safe at first. He stole second, but ended the inning there when Alex D lined out, Alex I flied out and Aaron struck out. Jack walked on four pitches in his second plate appearance. He ended the inning there when Alex D flied out. In his third at-bat with the bases loaded and no outs, Jack hit a 1 and 2 pitch for a sacrifice fly to right field and a RBI. With one out and the bases loaded in the top of the seventh, Jack struck out looking at three straight pitches!

Jack played right field. He had two put-outs and an assist. Making a catch in right field, Jack doubled a runner off second base for an assist.