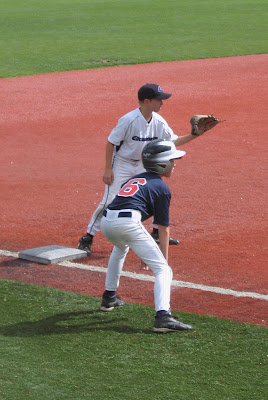 Not a very successful day... The Gunners drew the first two games of the day: an 8:00 a.m. game and a 10:15 a.m. game. I got Jack up about 5:45 a.m. and we left the house about 6:15 a.m. It was raining lightly when we got to the Big League Dreams Park in Manteca. The Gunners scored two runs in the top of the first. In the bottom of the first, with one of the Gunners best pitchers on the mound, it started to rain pretty hard. Our pitcher who throws hard had a difficult time with his grip in the rain. The Gunners ended up walking 6 batters in the inning and giving up 10 runs in the bottom half of the inning.

Jack played four innings in left field. He had one ball hit through the infield to him. In the light rain, Jack barehanded the ball and threw it back to second. My heart skipped a beat when I watched him barehand the wet ball. He said afterwords that the ball had some funny spin on it.

The Gunners ended up losing the first game to Hard 90 Pastime by a score of 11 to 2 in four innings.

Jack played three innings at third base (1st, 2nd and 6th). In the top of the sixth with runners on second and third and no outs, Jack was holding the runner at third. A ball was hit sharply to the left side. Jack fielded the ball cleanly and looked towards first. As he looked at first, the runner on third took a couple of steps towards home. Jack started back to third. He chased the runner towards home plate and made a solid throw to the catcher who tagged out the runner. At the time, the defensive play kept the game tied at 3. Unfortunately, a couple more walks and a single blew the game open.