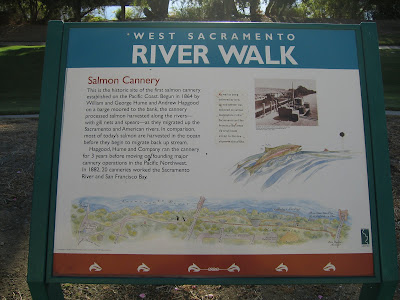 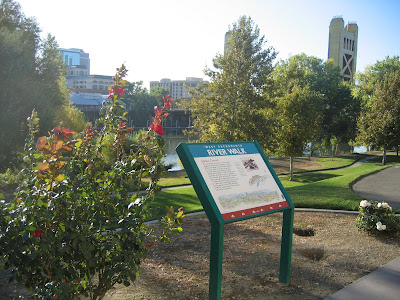 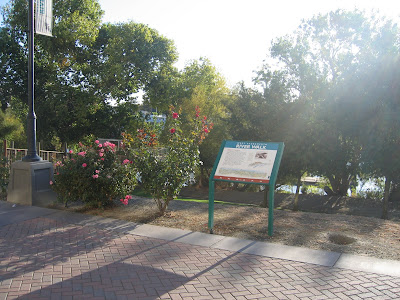 This is the historic site of the first salmon cannery established on the Pacific Coast. Begun in 1864 by William and George Hume and Andrew Hapgood on a barge moored to the bank, the cannery processed salmon harvested along the rivers-with gill nets and spears-as they migrated up the Sacramento and American rivers. In comparison, most of today's salmon are harvested in the ocean before they begin to migrate back up stream.

Salmon caught in the Sacramento River were canned by the cooker-boiler method, rather than the contemporary salt preservation method of that time. This allowed for wider markets and lower prices.

Hapgood, Hume and Company ran the cannery for 3 years before moving on founding major cannery operations in the Pacific Northwest. In 1882, 20 canneries worked the Sacramento River and San Francisco Bay.

Although nothing of the original operation remained at the time of designation, the site was designated a National Historic Landmark in 1966. A plaque commemorated the site of the First Pacific Coast Salmon Cannery Site. The plaque disappeared and the riverbank's appearance has changed through the site's development as a park by the City of West Sacramento. Consequently, the site's designation as a National Historic Landmark was withdrawn on July 14, 2004 by the Secretary of the Interior.

Subsequently, the site was designated a California Historical Landmark.

After months of fundraising, through the support of the West Sacramento Chamber of Commerce and the City of West Sacramento, the West Sacramento Historical Society is getting closer to purchasing and installing the State Historic Landmark plaque commemorating the salmon cannery. This bronze plaque will be the first state historic landmark in West Sacramento. The site selected will be on the River Walk near the north corner of the ziggurat building.
Posted by Heringer at 10/16/2008 05:00:00 AM