Jack and I stopped here on the way back from a baseball tournament at Big League Dreams in Manteca.

Reuel Colt Gridley Monument
California State Historical Landmark #810
See this location on Yahoo Maps in Flickr
See this location on Google Maps
This landmark is located near the Memory Chapel in the Stockton Rural Cemetery at the corner of Cemetery Lane and East Pine Street, Stockton, California in San Joaquin County. There are 24 other California State Historical Landmarks in San Joaquin County. The GPS coordinates for this location are N 37° 58.648 W 121° 17.185. 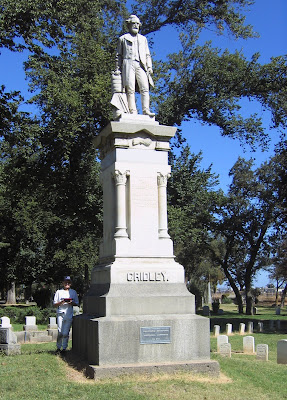 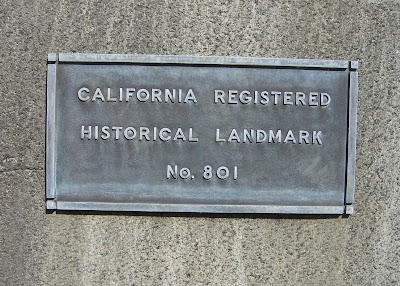 The monument reads:
The Soldiers Friend

Erected by
Rawlin's Post No. 23.
Grand Army of the Republic
and the Citizens of Stockton
September 19, 1887 in gratitude
for services rendered Union
Soldiers during the War of
the Rebellion in collecting
275000 dollars for the
Sanitary Commission by
selling and reselling a
sack of flour.

Ruel C. Gridley in April, 1864, was engaged in the grocery business in Austin, Nevada. As the city election came on he bet a sack of flour with Dr. Herrick that the Douglas-Democrat would be elected mayor. Gridley lost the bet. Its conditions were that the loser was to carry the flour from Austin to Clifton, a distance of a mile and a quarter. At the appointed time Mr. Gridley appeared carrying the flour on his shoulder, neatly trimmed with ribbons and flags. A procession was then formed of citizens of both parties and preceded by a band of music they marched to Clifton. On arrival the saloon keeper invited the crowd in to take a drink. While in the saloon there was much joking regarding this fifty-pound sack of flour. At last Mr. Gridley said, "This crowd of people have had their fun at my expense: let us see now who will do most for the sick and wounded soldiers. We will put this sack of flour up at auction to be sold for cash, with the understanding that the buyer is to return it, to be sold again for the benefit of the sanitary commission." Ready for any kind of excitement, the proposition was quickly accepted. The chairman of the local commission acted as auctioneer. It was sold and resold for $4,400. then taken to Gold Hill, it was sold for $5,225. Taken to other places the sales were lifeless without the inspiration of Mr. Gridley. This patriot then, leaving his business and paying his own expenses, traveled throughout the Pacific coast and a few of the eastern states, selling the famous sack of flour. Mr. Gridley died in Stanislaus county November 24, 1874, of consumption, the result of overwork and exposure during his travels. He was later buried in the Soldiers' Grand Army plot at Stockton. Rawlins Post erected over his grave a magnificent marble monument and life-size statue.
Posted by Heringer at 10/09/2008 11:30:00 PM