Treaty Rock
Idaho Highway Historical Marker #348
National Register of Historic Places #1992000420
See this location on Yahoo Maps in Flickr
See this location on Google Maps
This landmark is located north of I-90 and northeast of Spokane River falls, Post Falls, Idaho. The GPS coordinates for this location are N 47° 42.860 W 116° 57.080.

You can log your visit to this site at waymarking.com. 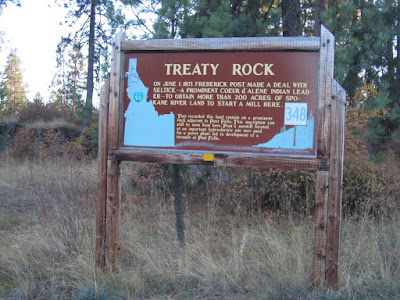 They recorded this land cession on a prominent rock adjacent to Post Falls. This incription can still be seen from here. Post's sawmill located at an important hydroelectric site now used for a power plant led to development of a townsite at Post Falls. 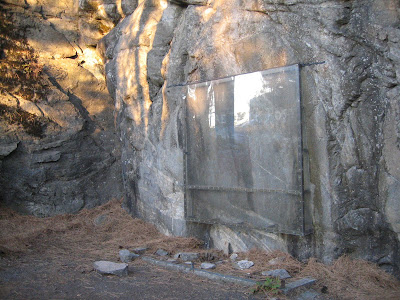 This large, conspicuous rock (located near Post Falls--a major Spokane River power site) contains important examples of ancient Indian rock art. Petroglyphs (carvings) and pictographs (paintings) both are present there. When Frederick W. Post obtained a Coeur d'Alene Indian agreement to allow him to build a power plant and mill there in 1871, he added his name and date to those designs. His inscription did not represent a treaty, and Idaho's Coeur d'Alene people did not even gain a treaty for two more decades. He moved on west to Spokane Falls, but his early development at Post Falls led to a settlement there that grew up around his power and industrial site.