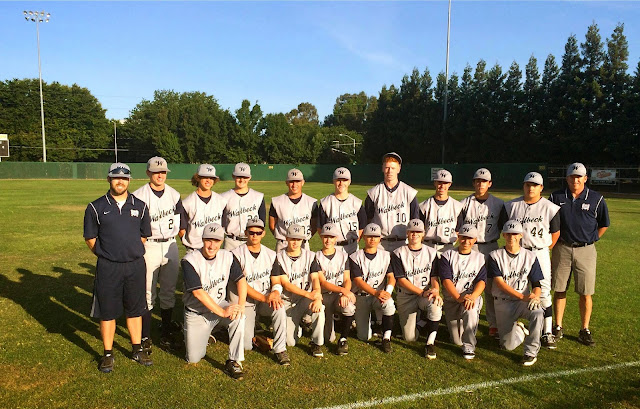 The Walbeck Elite team played its first games of the season in the River City Travel Ball Memorial Day Madness Tournament. The Elite team is made up of 16U players, but will be playing mostly 18U tournaments over the next two months.

Leading off, Jack was 0 for 4 reaching on an error. In his first at-bat, he ran the count to 1 and 2, fouled off pitched and struck out swinging on a low pitch. Jack grounded a 0 and 1 pitch to shortstop and was thrown out at first in his second plate appearance. In his third at-bat, he grounded a 2 and 2 pitch to the right side that the second baseman couldn't handle. Jack was safe on an error. He went to second on a passed ball, to third on Dailey's single to right and was called out at the plate on Lee's fielder's choice chopper to the first baseman. Jack made a great slide and looked safe. Jack grounded a 0 and 2 pitch to the pitcher in his fourth plate appearance and was out at first.

Looking a little flat and giving up a two run homer to left, the Elite lost the game by the score of 8 to 6. The scorecard is here.

After a break, the Elite played West Coast Baseball at 12:45 pm. This is not a team that Jack has faced before. Additionally, I didn't recognize any of the players on the roster.

Leading off, Jack was 1 for 3 with a stolen base. In his first at-bat, Jack ran the count to 1 and 2, fouled off a pitch and struck on a pitch in the dirt. He was thrown out at first on the dropped third strike. Jack ran the count to 1 and 2, fouled off two pitches and then hit a grounder deep in the hole for a single in his second plate appearance. He stole second and went to third on Dailey's ground out to the pitcher, but ended the inning there when Richardson grounded out to short.

The Elite managed only two hits: Jack's single and Isola's line drive into center. The West Coast Baseball's pitcher [Murphy] pitched seven strong innings, including striking out 10 and walking none. Someone said on Sunday that the pitcher was throwing 85 mph. The Elite lost the game by the score of 7 to 2. The scorecard is here.

Both Elite and Hard90 finished the first day of the tournaments with 2 losses and no wins. The Elite are going to need a win on Sunday and a lot of help from other teams to make it to the single elimination round on Monday.