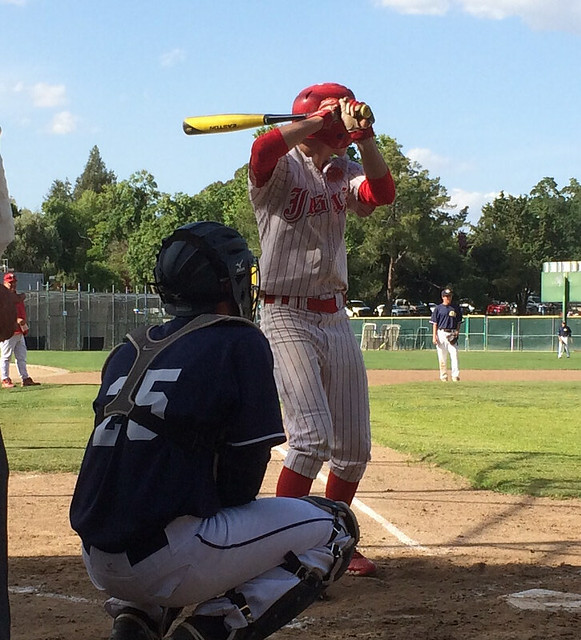 Leading off, Jack was 0 for 2. In his first at-bat, he struck out looking a high 0 and 2 pitch. Jack crushed a 1 and 2 pitch for a hard high fly ball in his second plate appearance. I don't think I have ever seen him hit one so far up in the air. I thought for a second that the left fielder was going to have trouble getting back to get it, but he made an awkward catch for the out. Jack and I talked in the car later about how if he had gotten his hands on top of the ball it would have been on top of the batting cages in left field.

Playing centerfield, Jack had two put-outs and an error in three innings. In the top of the second, a soft fly ball was hit in front of Jack. Initially, I thought that he was going to try and dive for it, but back off at the last second. As the ball bounced in front of him, it looked like he took his eyes off the ball to see what the runner was doing rounding first. The ball got by him. When he finally caught up to the ball, Jack made a poor throw into the infield. By the time it was all said and done, the runner was on third. I charged Jack with an error.

Batting fifteen different players, the Marauders won the game by the score of 3 to 1 behind a strong pitching performance. The box score is here and the scorecard is here.

The Jesuit JV baseball team finished the season with 24 wins and 4 losses. Their league record was 14 wins and 1 loss. The game log is here. Behind Coaches Tucey and Lewis, this is the fourteenth straight year that the JV team has won their league.

After the game, a large group of the JV players and their parents walked over to watch the end of the varsity game. With lots of running amok by the umpires [coach P got tossed], the Marauders Varsity team lost the game by the score of 6 to 4. For the first time in eleven years, the Jesuit varsity team missed the play-offs.
By Heringer at 5/07/2014 11:59:00 PM