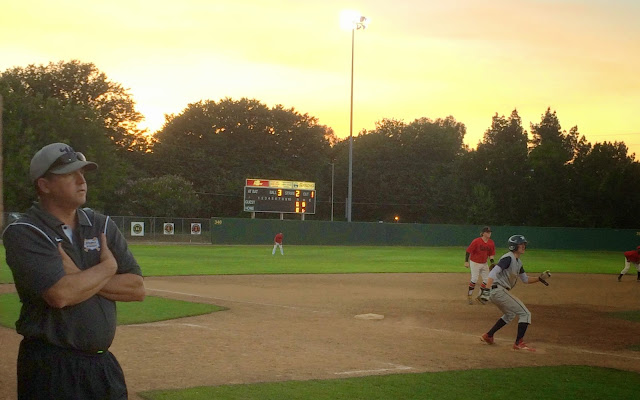 Back at McAuliffe Fields at 8 am for the second day of the River City Travel Ball Memorial Day Madness Tournament, the Walbeck Elite played IBAC Blue. In order to have any chance to play on Monday, the Elite team really needed to win this game. Trevor Beards who played with Jack on the Jesuit JV baseball team was playing for IBAC Blue.

Leading off, Jack was 3 for 3 with a double, two singles, a walk, three stolen bases and a run scored. In his first at-bat, he ran the count to 0 and 2, fouled off a pitch and then hit a hard ground ball at the third baseman for a single. Jack stole second, but was doubled off second base on Kyle's line drive to the shortstop. Jack crushed a 3 and 2 pitch for a line drive double down the third base line in his second plate appearance. He went to third on Lee's fielder's choice grounder to the third baseman. The third baseman got the ball and tried to tag Jack going to third. Jack was already pass him and was safe at third. He scored on Roessler's sacrifice fly to right. In his third at-bat, Jack drove the seventh pitch into right field for a line drive single. It was a very nice piece of hitting. He stole second, went to third on a passed ball, but ended the inning there when Richardson struck out. Jack walked on five pitches in his fourth plate appearance. He stole second, but ended the inning there when Richardson grounded out to short. 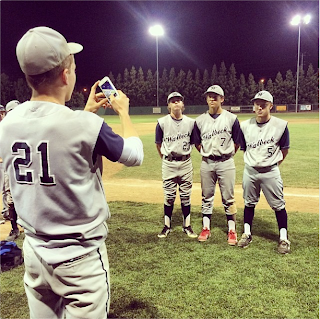 With the tie, the Elite ended up the pool play seeded eighth out of the eight teams. They played the Beasts in the consolation game of the tournament at 7:45 pm Sunday night. Jack Wolger who played with Jack on the Jesuit JV baseball team was playing for the Beasts.

In all four games over the weekend, the Elite were the visiting team. As a result, Jack had to step to the plate to start the game in all four games…

Leading off, Jack was 0 for 2 with a walk, a run scored and a RBI. In his first at-bat, he walked on five pitches. He stole second, went to third on Dailey's ground out and scored on a passed ball. Jack ran the count to 1 and 2, fouled off a pitch and then hit a grounded to the shortstop in this second plate appearance. He was thrown out at first. In his third at-bat with the bases loaded in the top of the fourth, Jack hit a 1 and 2 pitch for a hard grounder to the right side. Initially, I thought that it was going to get through, but the second baseman made a nice diving stop. Jack was thrown out at first, but Richardson scored from third for the RBI.

Although the Elite only managed two hits, the Beasts gave up 9 unearned runs on 4 errors and a handful of passed balls and wild pitches. The Elite won the game by the score of 9 to 0 in five innings. The scorecard is here.

The Silverhawks won the tournament. The final tournament results are here.